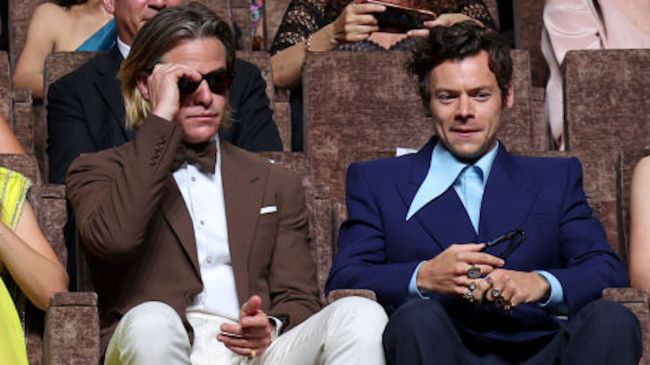 Ah, man — not only did Harry Styles apparently and allegedly spit at Chris Pine during the Don’t Worry Darling premiere at the Venice Film Festival, but the poor guy apparently had to have what’s known as a “Sad Ben Affleck Moment” during an interview alongside the former One Direction star.

While being interviewed at the Venice Film Festival, Styles — who previously starred in Christopher Nolan’s 2017 World War II film Dunkirk — was detailing what he loved about Don’t Worry Darling. However, Styles’ soliloquy wasn’t particularly eloquent, and as a result, both his response and Chris Pine’s pained facial expression have since gone viral.

“My favorite thing about the movie is, like, it feels like a movie. It feels like a real go-to-the-theater film movie. The reason why you go to watch something on the big screen,” Styles said.

you can almost see the screams catching in his throat pic.twitter.com/AXtiPAd4zx

this is even funnier when you remember chris has a bachelors in english from berkeley and he grew up in the film industry and now he’s sitting next to someone saying “my favourite thing about the movie is like it feels like a movie” pic.twitter.com/1lKltp4ZPU

Harry styles at the DWD conference: “my favorite part about the movie is that it feels like a movie”

Chris pine next to him : pic.twitter.com/RhJM4L1hPQ

harry styles about to watch the movie that feels like a, like a movie. That feels like a real, like, you know, like, go to the theatre film movie, the, ya know, you kind of, the reason why you go to watch something on the big screen. pic.twitter.com/2frvjncrlQ

harry styles when he’s at the movies and the movie isn’t feeling like a movie pic.twitter.com/OwAKGONFVj

Imagine being Chris Pine, a PROFESSIONAL actor. Flip phone is charged. Feminist theory books on deck for your down time between junkets. You show up to your cast HATING each other and you get stuck on a junket with a man who has seemingly just figured out what acting is? Wow.

*Don’t worry*, Chris: you remain the best Hollywood Chris and you’re only a few weeks away from this nightmare press tour ending. Maybe this will convince him to finally make that fourth Star Trek movie. Just hang in there, king.