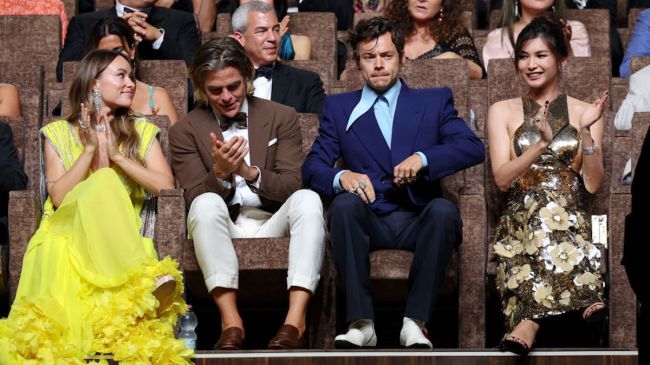 After becoming a directorial starlet following her 2019 debut Booksmart, Olivia Wilde’s experience rolling out her new film Don’t Worry Darling has been far different, to say the least.

First, it all began last year, when reports indicated that Wilde had fired Shia LaBeouf due to his on-set behavior. While LaBeouf didn’t dispute Wilde’s claim at the time, he has since convincingly done so, providing evidence that suggests he did actually quit the film.

Then, reports indicated that Don’t Worry Darling star Florence Pugh was unhappy with Wilde due to her on-set romance with Styles, and as a result would not be participating in the film’s press tour.

Finally, at the film’s premiere at the Venice Film Festival, the Don’t Worry Darling drama potentially hit its peak as Styles appeared to spit at co-star Chris Pine.

After the incident went instantly viral, movie fans took to Twitter to react to the incident, with a large majority of the reactions expressing regret that Pine — arguably the best Hollywood Chris — has had to go through this Don’t Worry Darling mess (which apparently isn’t even that good, as it currently has a 39% on Rotten Tomatoes).

Will Smith seeing Chris Pine not lose his shit pic.twitter.com/fh1ostorBh

chris pine disassociating at a press conference, florence pugh showing up 15 mins late with an aperol spritz, tom cruise clinging to a plane and saying "see you at the movies!", brendan fraser getting a six minute ovation…maybe cinema really is back

Imagine being Chris Pine, a PROFESSIONAL actor. Flip phone is charged. Feminist theory books on deck for your down time between junkets. You show up to your cast HATING each other and you get stuck on a junket with a man who has seemingly just figured out what acting is? Wow.

Harry styles at the DWD conference: “my favorite part about the movie is that it feels like a movie”

Chris pine next to him : pic.twitter.com/RhJM4L1hPQ

What is @POTUS doing to protect our Americans abroad (Chris Pine) from foreign threats (Harry Styles) ??????

chris pine is about to be so confused when he shows up today and none of his coworkers are speaking to each other https://t.co/EKIkgkvs4y

Don’t Worry Darling, which stars Pine, Gemma Chan, and Wilde herself alongside Pugh and Styles, will hit theaters in the United States on September 23.