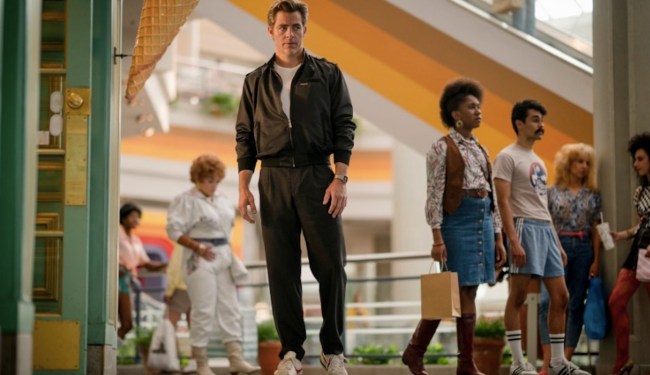 Wonder Woman — which came out back in 2017 — has long been credited for changing the way Hollywood sees female superheroes, as the film was a smashing success across the board: critically beloved, commercially powerful, and approved by the hardcore fans.

And while that’s all well and good, Wonder Woman doesn’t get enough credit for literally saving the DCEU, as the franchise was essentially on life support prior to Patty Jenkins’ masterstroke.

In the years since, the DCEU has rebounded into a relatively healthy franchise, as Aquaman and Shazam! were both similarly successful.

Now, just two years after the release of Wonder Woman, Warner Bros. is ramping up the hype machine for its sequel Wonder Woman 1984, which is set to be released on June 5, 2020.

Following last week’s reveal of the first poster for Wonder Woman 1984, director Patty Jenkins sat down with The Hollywood Reporter to discuss a variety of topics, including Chris Pine’s appearance in the sequel.

Pine, who crushed it as Diana Prince’s “boyfriend” or whatever Steve Rodgers, appears to die at the end of Wonder Woman after sacrificing himself to destroy a plane full of Nazi weapons.

Yet, despite his seemingly final fate, Warner Bros. essentially wasted no time in confirming Pine’s appearance in the sequel, which definitely had fans scratching their head.

And according to Patty Jenkins, Pine’s role in Wonder Woman 1984 has more to do with the actor than the actual character.

“I’ve had it [developing a strong bond]happen with several actors where you really get up to speed and you know that person, so you see this incredible skill that they’re of,” Jenkins said.

“Chris and I definitely have that. I also think that he has a bunch of dimensions of him that I haven’t quite seen him get to explore. Now, at this point, I’m feeling like I just want to keep working with so many of the same actors because it is so fun,” she continues.

So, basically, Jenkins figured out a way to work Steve Trevor into the sequel because she likes working with Chris Pine. Fair enough.

Normally, this would be a massive no-no when it comes to writing a script, but because we’re talking about a comic book movie, a character returning from the dead is truly nothing out of the ordinary.

‘Wonder Woman 1984’, which also stars Kristen Wiig, Pedro Pascal, Connie Nielsen, and Robin Wright in addition to Gadot and Pine, is set to be released in theaters on Friday, June 5, 2020.