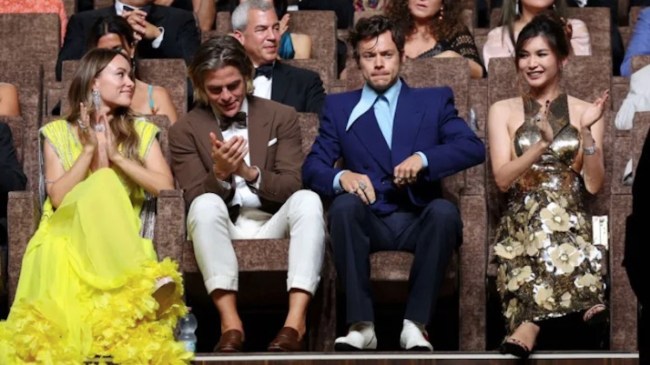 After a video of what some people believed to be Harry Styles spitting at Don’t Worry Darling co-star Chris Pine went massively viral, Pine’s representatives have put out a strongly-worded statement in response to the alleged incident.

Chris Pine’s team releases a statement about the viral Harry Styles clip, say that Styles DID NOT spit at the actor

In the statement, Pine’s reps say that Styles *did not* spit at Pine, and the suggestion that he did is a “complete fabrication.”

“”This is a ridiculous story — a complete fabrication and the result of an odd online illusion that is clearly deceiving and allows for foolish speculation. Just to be clear, Harry Styles did not spit on Chris Pine,” the rep told People. “There is nothing but respect between these two men and any suggestion otherwise is a blatant attempt to create drama that simply does not exist.”

Pine and Styles together in Olivia Wilde’s Don’t Worry Darling, which has generated a decent amount of negative headlines in recent weeks.

Last year, it was reported that Shia LaBeouf — who was originally set to star in Styles’ eventual part — was fired from the project due to his behavior. However, leaked text messages, emails, and videos from and of Wilde seem to suggest that perhaps LaBeouf quit the film and that Wilde wasn’t telling the truth.

Then, reports indicated that the film’s lead Florence Pugh was skipping the press tour due to her discomfort with the on-set romance that developed between Styles and Wilde, who are still dating.

At this time, Styles representatives have not made an official statement about the apparent spitting incident. Don’t Worry Darling hits theaters on Friday, September 23. The film also stars Nick Kroll and Gemma Chan.