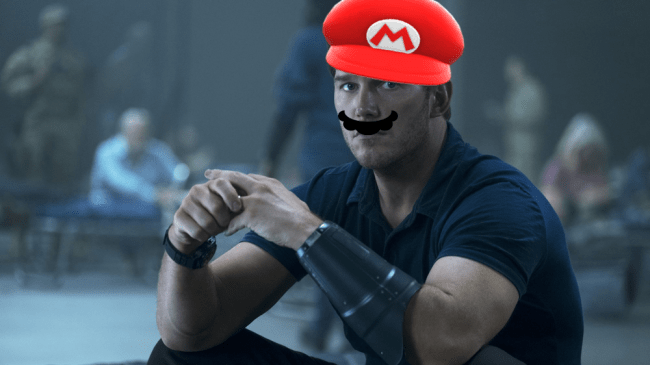 Christopher Michael Pratt, a 42-year-old from Minnesota of Norweigan descent, has been cast as the voice of Mario in an upcoming animated movie from Nintendo and Despicable Me studio Illumination. Now, to be clear, just in case your broken brain started going down that route: no, I’m not advocating for any sort of controversy around Pratt being cast as Mario. Who gives a damn? I just find the idea of Chris Pratt, a.k.a. Andy Dwyer, a.k.a Star-Lord, a.k.a whatever his name is in the Jurassic World franchise, slinging “It’s-a me-a, Mario!” around in a 90-minute movie to be, frankly, hilarious. Do you think he had to audition for the role and churn out a few “It’s-a me-a!” for a room full of studio execs who had lightbulbs illuminate over their head as they realized, “Yup! That’s our Mario!”

Naturally, it should come as no surprise that Twitter seems to agree with me, as movie fans basically lost their minds over the news that Pratt was voicing Mario. In addition to Pratt, the voice cast is as follows: Anya Taylor-Joy as Peach, Charlie Day as Luigi, Jack Black as Bowser, Keegan-Michael Key as Toad, Seth Rogen as Donkey Kong, Fred Armisen as Cranky Kong, Kevin Michael Richardson as Kamek, and Sebastian Maniscalco as Spike. All things considered, that’s a pretty fun cast! I know we’re all having fun making Chris Pratt jokes, but there’s no point in lying to y’all: I will watch this movie, likely whilst being very stoned.

Chris Pratt after getting cast as Super Mario pic.twitter.com/GDQsSuYV2Y

CHRIS PRATT IS PLAYING MARIO IN A MARIO MOVIE.

THIS IS REALLY REAL NEWS. WHAT https://t.co/KWnMmoWGfy

Celebrating the winter solstice by watching chris pratt do an italian accent https://t.co/DUwVFYjShp

cant wait for an image like this of chris pratt and mario once the mario movie comes out pic.twitter.com/qoE9sjG2wg

chris pratt is the only actor whose photo was black and white during the reveal of the mario movie cast, implying that he died while recording his lines for mario

Chris Pratt as Star-Lord in Guardians of the Galaxy (2014) pic.twitter.com/MwwNhjKvZD

At this time, The Super Mario Bros. Animated Film — I doubt that’s its real title but that’s how Nintendo marketed it in their announcement — is scheduled to hit theaters in the United States on December 21, 2022.