CNN Anchors Won’t Be Drinking During Their NYE Show, Likely Because They Got Too Turnt In Recent Years (Examples) 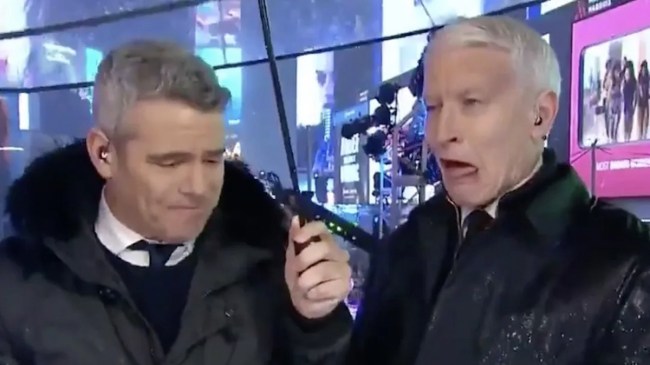 Even though I’ve never been the type to tune into some sort of countdown show on New Year’s Eve, even I’m aware that the anchors over on CNN — particularly and famously Don Lemon, Anderson Cooper, and Andy Cohen — get quite lit during the network’s live New Year’s Eve broadcast.

This year, however, CNN will apparently be reeling in the on-air drunkenness as reports indicate that only Cooper and Cohen will be allowed to partake in adult beverages during the show.

While Anderson Cooper will still be able to imbibe during primetime hours — along with his co-host Andy Cohen — while the duo holds forth in Times Square, correspondents and anchors who may have slurped down alcoholic concoctions on camera (or off) in the past will be required to halt the practice.

The network’s coverage of New Year’s Eve was a topic of a town-hall discussion held Tuesday between CNN staffers and Chris Licht, the company’s chairman and CEO. The coming New Year’s Eve broadcast will be CNN’s first under Licht’s aegis. During the meeting, Licht told employees he felt on-camera drinking eroded the credibility of CNN personnel and damaged the “respectability” they may enjoy among viewers. [via Variety]

Given how last year’s show unfolded, it certainly isn’t surprising that CNN is taking this step.

I won’t allow this narrative 😭 Sure Don was twerking and talking about broke dick on live television, but Andy is the one who was live on stage going in on DeBlasio like he was on an episode of RHONY

we ain’t forget about this one pic.twitter.com/Qd0KjgxZaf

No cause you just had to be there 😭 https://t.co/xamVaQqOIg pic.twitter.com/sXZ7SoBBnp

There is certainly no shortage of videos of CNN anchors absolutely smashed live on-air:

This had to be the nail in the coffin https://t.co/fVe3SwMXrx pic.twitter.com/pWIBE79Qhz

Drunk Don Lemon is a whole vibe. It’s the best part of New Year’s Eve. This is bullshit. https://t.co/BGLdUep1Fl

Let’s be honest, Drunk Don Lemon was the only reason we tuned in. https://t.co/G5ZhpaIPGS

Still, many people are disappointed that they won’t be able to see Don Lemon get turnt up on their TV screens anymore. In fact, a majority of people on social media seemed to indicate that the drunken debauchery of Lemon, Cooper, and the rest of the gang is the only reason they tuned into the broadcast in the first place.

Now, that said, just because the anchors won’t be drinking ON-CAMERA doesn’t mean they’ll be stone-cold sober, either. CNN isn’t perfect, but they certainly aren’t stupid, so they have to know what a draw drunk Lemon and Cooper are, especially for Gen X and Boomers.

RELATED: Drunk Anderson Cooper Was Giggling Like A Maniac During ‘Have You Gotten High’ Segment With Snoop Dogg On CNN’s NYE Show