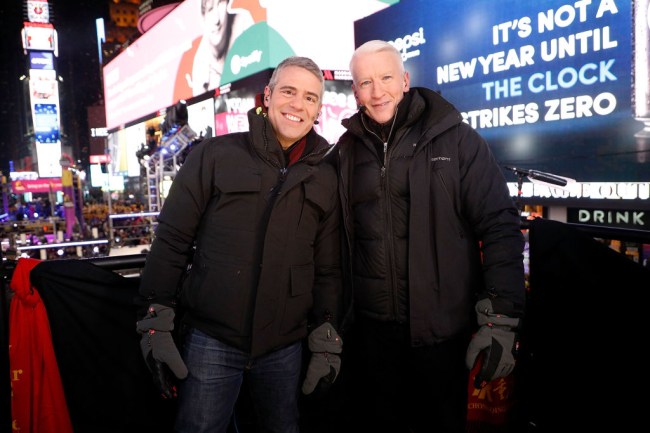 A tradition unlike any other, the anchors of CNN getting plastered on New Year’s Eve while broadcasting live. Each year, CNN suspends its regular news coverage to present an on-air NYE party where anchors Don Lemon and Anderson Cooper get drunk. The 2020 CNN New Year’s Eve special may have been their greatest yet.

CNN correspondent Randi Kaye was reporting live from a bar in Key West, Florida, just before 10 p.m. on Tuesday night. For her New Year’s Eve coverage, Kaye was interviewing a drag mermaid who was soaking in a bathtub filled with sparkling rum as one does in Key West on NYE.

“I don’t think I’ve ever seen a tail so huge,” Randi said. “That’s not the only thing that’s huge here, honey,” the drag queen joked. The insinuation of a large penis made host Andy Cohen’s jaw to drop to the floor, and then he joking asked, “Is she seeing anybody?”

Then the mermaid forcibly pulled Randi Kaye into the boozy bathtub, and the crowd on Duval Street cheered. “This is Jeff Zucker’s worst nightmare,” Cohen made a joke referencing CNN’s president.

It’s not even 10 p.m. yet and @randikayeCNN in Key West somehow finds herself in a bathtub of sparkling rum with a mermaid? #CNNNYE pic.twitter.com/cflJPOFOYm

The discussion about large penises didn’t end in the bathtub full of liquor. Anderson Cooper talked about his late mother, Gloria Vanderbilt, appearing on Andy Cohen’s Bravo TV show Watch What Happens Live when she was alive. Gloria asked her son Anderson what questions Andy will ask her on the interview show.

Anderson Cooper and Andy Cohen are DRUNK and talking about DICK on LIVE TV pic.twitter.com/iC3yyazcUO

But the cock talk didn’t stop there. While Cooper and Cohen were talking to Shaquille O’Neal, they brought up a previous interview that Andy had with the NBA Hall of Famer. Shaq appeared on Watch What Happens Live back in 2014, where Andy asked the Lakers legend about his shoe size, which led to a question about the size of Shaq’s genitalia.

On national TV, during the countdown to the new year, @Andy Cohen had @Shaq on and needed to revisit a question that's been bugging him forever.

During the 2014 interview, Cohen specifically asked O’Neal, “How big is your dick?”

Andy Cohen had so much tequila he confused 50 Cent with Shaq… 😂😂😂 #CNNNYE pic.twitter.com/NbQQN23Yq4

Cooper, who has struggled mightily with liquor shots in previous New Year’s Eve specials, did a shot to end the interview with 50 Cent. Cooper held it together for a second before making weird gurgling noises. “I didn’t want to explode in front of 50 Cent,” Cooper said after downing the tequila shot. “I was trying to look cool in front of him.”

Anderson Cooper is still struggling with shots but he held it together because he wanted to be cool in front of 50 Cent 😂😂 pic.twitter.com/3ffp73sAiA

Cooper had problems throughout the night attempting to drink shots of alcohol and made several sounds that are not supposed to emanate from a human.

Then Andy supplied Anderson with his very first shot of Jaegermeister.

😂😂😂😂😂😂
Anderson Cooper asked "what is Jager" and he nearly died on live TV.
Quote Anderson: "Who drinks this?"#CNNNYE pic.twitter.com/g3rg0MEiyP

I remember my first shot of Jager.

Then there was a random appearance by Lindsay Lohan, direct from Oman, where she is vacationing.

Lindsay Lohan is currently being held captive in the Kingdom of Oman. pic.twitter.com/P6DAAS2IDy

But its not officially New Year’s Eve until Don Lemon gets drunk.

Drunk Don Lemon said that he got on a tattoo on New Year’s Eve and unveiled his ink on CNN’s live coverage. The alleged tattoo announced the CNN’s anchor’s bid to be the next President of the United States. The hopefully fake tattoo on his arm read: “Don Lemon 2020.” Fellow news anchor Brooke Baldwin who was with Lemon “reporting” from Nashville, wasn’t buying it.

I hope your New Year’s Eve celebration was as festive as the anchors from CNN.

NYE: Anderson Cooper Struggles Mightily With Tequila Shots, Gets Drunk, Tells The World His Mom Hooked Up With Marlon Brando