NYE: Anderson Cooper Struggles Mightily With Tequila Shots, Gets Drunk, Tells The World His Mom Hooked Up With Marlon Brando 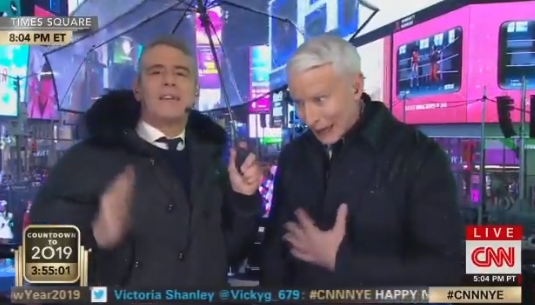 The last two New Year’s Eve broadcasts on CNN drunk Don Lemon got hammered off of tequila shots. This year it was Anderson Cooper’s turn to get lit during CNN’s New Year’s Eve coverage.

Cooper and co-host Andy Cohen were broadcasting live for CNN from New York City’s Times Square. The duo did a shot of tequila each hour starting at 8 pm until midnight. Andy is no stranger to boozing it up, he hosts his own late-night talk show Watch What Happens Live on E! that has a bartender and a few weeks ago he pounded shots with college kids in New York City at a SantaCon party.

Cooper, on the other hand, does not appear to be a drinker whatsoever. Cooper had the struggleface of all strugglefaces when he took his first shot of tequila.

I remember my first shot when I was 12.

Cooper had the look “I feel like my lungs are scorched,” Cooper said. “Good. It’s just the beginning,” Cohen replied. It didn’t get better with the second shot as the 51-year-old CNN anchor cawed like an injured crow upon consuming the firewater. The third shot he continued to cry out like a newborn sparrow calling for its mama and then Cooper had a coughing fit. “I’d rather have Nyquil,” Anderson told Andy.

On the fourth tequila shot, Cooper gets the shakes.

After the 11 pm shot, Cooper joked that he was worried that Cohen might try to kiss him when the ball drops. Cohen immediately refuted the idea by saying, “Actually I’m not planning on that, to tell you the truth.”

Apparently, when the liquor is flowing Anderson Cooper likes to spill the tea on what celebrities his mom hooked up with. Cooper’s mom is socialite and heiress Gloria Laura Vanderbilt. While talking to actress Faye Dunaway, Cooper let the world know that his mom hooked with actor Marlon Brando.

“She and Carol Matthau both watched the movie and both made a deal they were going to ‘meet up.’ Carol got it first and then set it up for my mom. It was a ‘one night date,'” Cooper said of his mother who turns 95-years-old next month.

Anderson Cooper talks about his mom's sex life, says she "hooked up with" Marlon Brando: “She and Carol Matthau both watched the movie and both made a deal they were going to ‘meet up’ … Carol got it first and then set it up for my mom. It was a ‘one night date.” pic.twitter.com/406dGiFUgO

For those wondering, yes, Don Lemon got drunk this New Year’s Eve. He has to, it’s a NYE tradition like the ball dropping in Times Square. Drunk Don Lemon said he wasn’t drunk, but that was determined to be a lie when he couldn’t find his straw and dropped his drink and didn’t even know.

Don Lemon struggling to get a straw in his mouth, followed by his drink falling to the ground #Donforpresident #priceless #CNNYE @donlemon pic.twitter.com/ijiVrwa2Hk

Don lost track of how many Tito’s vodka sodas he had consumed while covering New Year’s Eve from New Orleans.

Tipsy Don Lemon and Brooke Baldwin were so much fun to ring in 2019 with! @CNN #CNNYE #DonLemon #BrookeBaldwin @donlemon pic.twitter.com/GqJLG1WjQt

In the end, drunk Don Lemon admitted, “I’ve had a lot of Tito’s.”

Don Lemon speaking for all of us pic.twitter.com/iRDT1oWqhr

May your 2019 be drunk Don Lemon drinking vodka sodas and hopefully not Anderson Cooper doing struggling to down tequila shots.