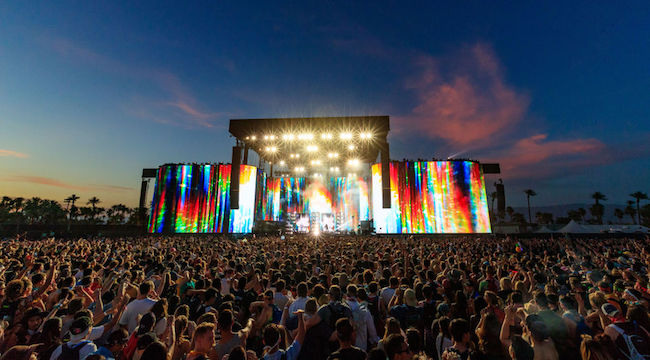 In 1999, 400,000 people flocked to Woodstock, NY in an attempt to recapture the spirit of the legendary festival that had taken place in the town 30 years prior. While I’ll personally always remember it for a legendary performance by Kid Rock that featured an absurdly large fur coat, a drummer in a 7-Eleven uniform, and a profanity-filled introduction by Uncle Kracker, it’s largely gone down in history as a disastrous event marred by arson, violence, and overflowing toilets.

Three months later, 40,000 people traveled to the outskirts of Joshua Tree National Park (a place best known for having the most mushroom trips per capita in the world) to attend the inaugural Coachella Valley Music and Arts Festival in Indio, California. The event was meant to be the antithesis of the catastrophic gathering at Woodstock, and over the next couple of decades, Coachella would essentially set the standard for what a music festival should be.

In its current incarnation, Coachella takes place over two consecutive three-day weekends featuring identical lineups on each. Traditionally speaking, it features three headliners that even the most out of touch parents have heard of, a solid undercard of performers anyone who’s listened to the radio in the past couple of years has listened to, and dozens of smaller acts you probably only know about if you spend a bit too much time on internet music forums.

This year’s festival will take place on April 12th-15th and 20th-22nd at the Empire Polo Club. If you’re thinking about whether or not to make the pilgrimage, you’re probably going to want to look at the lineup to see just how many acts you give a shit about.

We already knew Beyoncé would be a headliner after she canceled her appearance last year after realizing it was a bad idea to get on stage while six months pregnant, and she’ll be bookended by performances by The Weeknd and Eminem. If history is any indication, you should expect some other high-profile names to show up unannounced.

Tickets will go on sale at 12 PM Pacific Time on Friday, January 5th. The prices range from $429 for general admission to $999 for a VIP package.