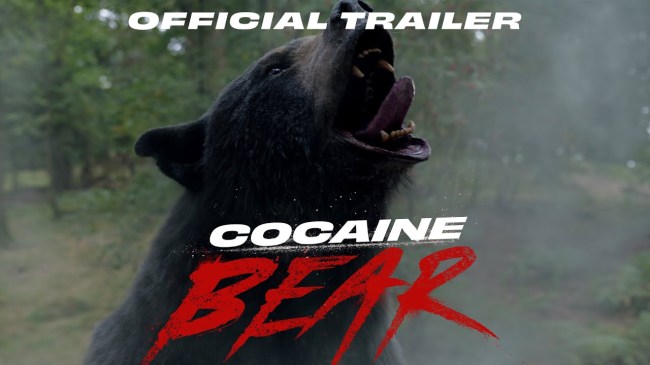 Universal Pictures has unveiled the official first trailer for Cocaine Bear, which is directed by Elizabeth Banks and is based on a wild true story of a behemoth quarter-ton-weighing bear ingesting a duffel bag full of cocaine back in 1985. The release of the trailer comes just days after the glorious first poster for the movie was released on Monday.

Here’s the official synopsis for Cocaine Bear, via Universal Pictures:

Inspired by the 1985 true story of a drug runner’s plane crash, missing cocaine, and the black bear that ate it, this wild dark comedy finds an oddball group of cops, criminals, tourists and teens converging in a Georgia forest where a 500- pound apex predator has ingested a staggering amount of cocaine and gone on a coke-fueled rampage for more blow … and blood.

Cocaine Bear was also produced by Banks and prolific directorial duo Phil Lord and Christopher Miller, who are known for their work on the Jump Street, Lego Movie, and Into the Spider-Verse franchises. Given the track record that the pair have had producing beloved and inventive comedies over the last decade or so, it’s safe to assume that Cocaine Bear will be more of the same.

RELATED: First Look At ‘Cocaine Bear,’ A Movie About A Bear That Eats A Ton Of Cocaine