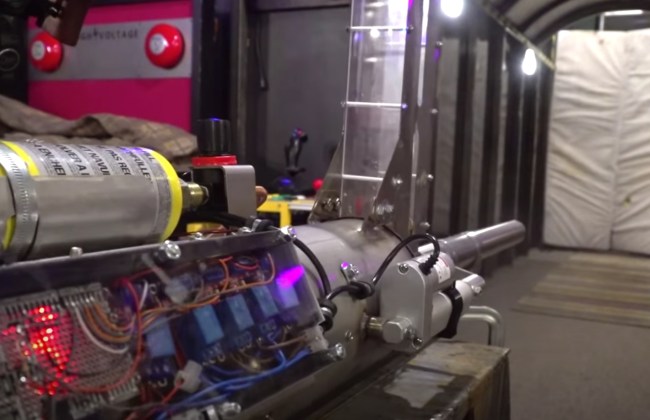 It has been A LONG time since I last built a potato gun but me and the squad had a great run of building these back in the day and firing them off until they’d fall apart and then we’d go back to Home Depot and start the process all over again. The first time we went, the employee at Home Depot knew exactly what we were doing and he was more than stoked to help us track down all the necessary parts and construct the perfect DIY potato gun.

Of course, those crudely build potato guns have ABSOLUTELY NOTHING on this semi-automatic potato gun built by YouTuber and mad genius Colin Furze. The only thing that bums me out about this video is it appears to be a thinly-veiled promotion for some video game called ‘World of Tanks’ but that shouldn’t distract us from the fact that he’s managed to build the most powerful semi-automatic potato gun most of us have ever seen.

The finished product looks more like a Flux Capacitor from Back to the Future than it resembles an actual potato gun but when he’s finished building it and firest the potato gun off around the 9:30 mark you can see how insanely powerful this device it.

This thing blows a hole straight through his mattress and sends off a wave that’s powerful enough to make him jump when the potato gun fires. Check it out, but feel free to watch this video at 2x speed or jump ahead a few minutes to skip over the intro:

Building a normal potato gun is actually a relatively easy DIY project. You’ll need some PVC pipe of varying lengths, PVC primer + cement, a saw, drill, hairspray, and a lighter. There’s not much else to it.

You can easily find a thousand easy tutorials online if you’re looking for a weekend project!