Colombia’s ‘Most-Feared’ Drug Lord Captured, Accused Of Importing 80 Tons Of Cocaine Into The US 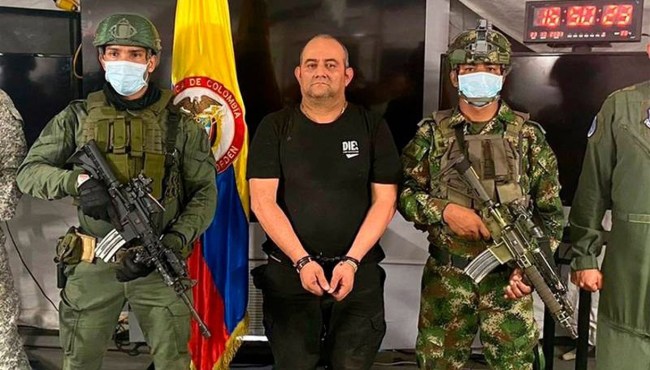 Colombia’s most-wanted drug lord Dairo Antonio Usuga, also known by the alias Otoniel, was revealed to have been captured in a televised national address by Colombia’s President Ivan Duque Marquez.

“This is the heaviest blow that has been dealt to drug trafficking in this century in our country,” Duque said. “This blow is comparable only to the fall of Pablo Escobar in the 1990s.”

The 50-year-old Usuga, a former member of the Popular Liberation Army, a communist guerilla group, has been on the United States Drug Enforcement Agency’s most wanted list for years and at the time of his capture 132 warrants for his arrest had been issued.

Usuga was indicted by the Southern District of New York in 2009 and had a $5 million reward offered by the U.S. State Department for information leading to his arrest and/or conviction.

Dario Antonio Usuga David is allegedly one of the leaders of El Clan Del Golfo, formerly called Los Urabeños or Autodefensas Gaitanistas de Colombia, a heavily armed and extremely violent Colombian drug cartel comprised of former members of terrorist organizations that did not demobilize as part of the Colombian government’s justice and peace process. The organization uses violence and intimidation to control the narcotics trafficking routes, cocaine processing laboratories, speedboat departure points, and clandestine landing strips. The organization operates in 13 of Colombia’s 32 departments, most of which are in the northwestern part of the country. During a turf war with a rival criminal organization for drug trafficking routes, homicides shot up 443% over two years.

“Otoniel was the most feared drug trafficker in the world, a murderer of policemen, soldiers, social leaders, and a recruiter of minors,” said Duque.

The leader of the El Clan Del Golfo (Gulf Clan) drug cartel was captured as part of Operation Osiris which “led more than 500 soldiers and members of Colombia’s special forces to Úsuga’s jungle hideout, which was protected by an eight rings of security,” reports the Washington Post.

Indictments against Otoniel also were brought forth in Brooklyn and Miami federal courts which accused him of importing at least 73 metric tons (80.5 tons) of cocaine into the United States between 2003 and 2014 through countries including Venezuela, Guatemala, Mexico, Panama, and Honduras.

Colombia’s Defense Minister Diego Molano said more than 500 members of Colombia’s special forces, 22 helicopters and 10 unmanned surveillance drones were used in the Operation Osiris and Usuga will now be extradited to the United States.