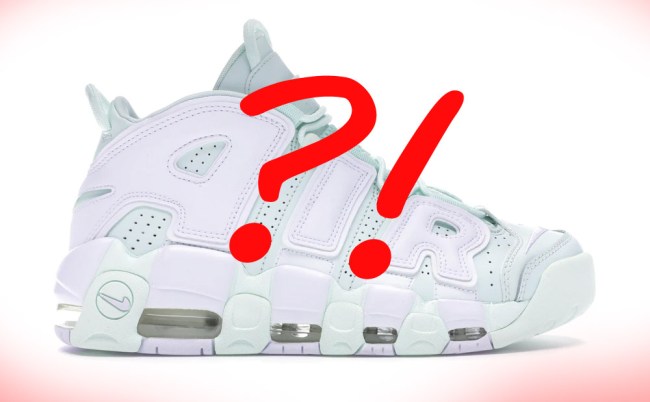 Oh god. Here we go again. Just when the internet was almost fully healed following that whole DRESS fiasco singer Billie Eilish goes and gets things roiling again with her Nike Air More Uptempo shoes that she claims are the colors mint and white.

In case you somehow forgot or were in a coma on or around February 26, 2015 it was quite a momentous day for the internet. Not only were there a pair of llamas engaging in a high-speed chase across Arizona that had every one capitivated, it was also the day that almost everyone with access to the web argued over whether a dress was blue and black or white and gold. (It was totally white and gold. I don’t care what anyone says.)

It was the most entertainment the internet had provided people since the controversial Laurel vs. Yanny debate.

And for anyone who still thinks/ever thought it was white/gold: you're still wrong and you should be publicly shamed pic.twitter.com/Su54kbLlZR

Fast forward to this past weekend and Eilish got the internet all heated again when she was asked about The Dress by a fan.

Then Eilish decided to up the ante.

“You guys are all my f**king dad,” she said later. “Years ago, I was wearing these shoes, and my dad’s like, ‘Wow, those shoes are so cool. What are those, pink and white?’ Dude. PINK AND WHITE?!”

Her dad is right.

“I don’t know what happened to you guys in your f**king childhoods,” she added. “Pink and white? That’s what you’re going with? PINK AND WHITE?!”

Billie Eilish says her shoes are mint and white. What color do y’all see? Mint and white or pink and white? pic.twitter.com/DKSe0jvPIU

Soooo… you’re telling me those shoes are white and mint green?

Not seeing it. I don’t care if, as she claims, Nike doesn’t even make the Nike Uptempo in pink and white. And I am far from alone in this belief.

HOW TF ARE THEY MINT AND WHITE AND NOT PINK AND WHITE!? IM GOING CRAZY. HELP. pic.twitter.com/mYtmYIj8eS

Is Billie Eilish being serious on her insta story or do we all not see them shoes as pink and white?

Wait… pink and mint?! That’s not even an option here!

I give up. What colors do you see?