Yanny Vs. Laurel? We Can Shut The Debate Down Now Thanks To These Sound Experts 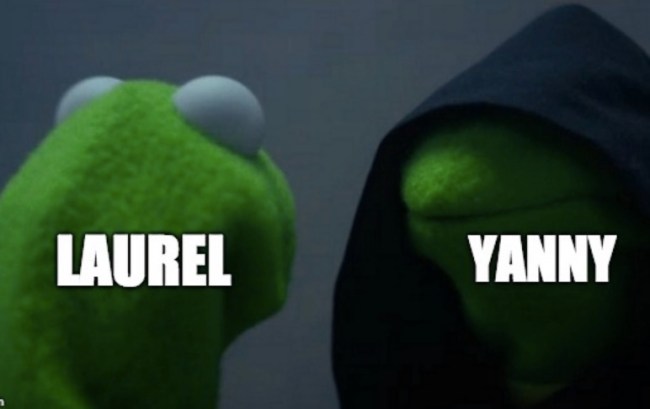 Everyone is calling ‘Yanny vs. Laurel’ the 2018 version of the Internet’s great debate over the Black/Blue vs. White/Gold dress. People are divided on the answer and cannot fathom how the other side would see or hear anything but what they see. Let’s start this off by you listening to the clip. At this point, I can’t even hate on people for incorrectly hearing ‘Yanny’ because there are so many of them:

What do you hear?! Yanny or Laurel pic.twitter.com/jvHhCbMc8I

I CLEARLY hear Laurel, and for a while, I didn’t want to write about this on the website because I couldn’t imagine how in the shit anyone would ever be able to year ‘Yanny’….but then it happened. I was in the other room this morning and had the TV in my bedroom on the TODAY Show where they played the clip and for the first time I could hear ‘Yanny’. So I sat down at my computer and listened (again) and all I could hear was Laurel (again), but I could at least recognize that there’s a potential to somehow hear Yanny.

Then I start digging around and wind up on this PopSci article where they’ve consulted sound experts to get their opinions on what it actually is. Those experts include Brad Story, a professor of speech, language, and hearing sciences at the University of Arizona, who did a waveform analysis of the recording and the structure of the waveform points to the original recording saying Laurel and not Yanny:

That first waveform is of the actual recording, which features the primary acoustic features of the “l” and “r” sounds. That leads Story to believe that the voice is really saying “laurel.” The fuzzier image below shows that the recording is of the third resonance of the vocal tract. As your vocal tract changes shape to form different sounds, it produces specific resonances, or natural vibrational frequencies. It’s these resonances that encode language within a soundwave (and thus how you can analyze a waveform and determine speech sounds). (via)

So, it’s Laurel. The answer is Laurel. But there is a reason people are hearing Yanny. Another expert weighs in:

Britt Yazel, a researcher at the UC Davis Center for Mind and Brain, agrees. “I honestly think after looking at the spectrograms and playing with some filters that this is just the word “Laurel” with some high frequency artifacts overlaying it,” he says. At first he thought it was two overlaid voices, but then he started cleaning up the audio a bit. Now he thinks that the overlaid frequencies above 4.5 kHz are what sound like “yanny” to some people. (via)

Going even deeper, part of the reason people are incorrectly hearing Yanny in place of Laurel is that the way we hear sound is influenced by our individual lives. What we hear is largely influenced by what our brains expect to hear.

If you really want to hear both Yanny and Laurel you can thanks to this Twitter user who has sped up and slowed down the clip for everyone:

Ok, so if you pitch-shift it you can hear different things:

For more on this you can visit PopSci and/or Vox