This past Friday, Colorado made headlines by opening the first In-N-Out locations in the state. One opened in Colorado Spring and one opened in Aurora, leading to lines upwards of 14 hours long. Seriously, people sat in their cars for more than half of a day to eat a fast food burger that, quite frankly, isn’t worth waiting in line for more than 30 minutes to try.

In nearly the same amount of time, those same patrons could have taken a beautiful scenic drive through the Rocky Mountains and across state lines to the closest bordering joint. But people are lunatics and apparently have a lot of free time on their hands. 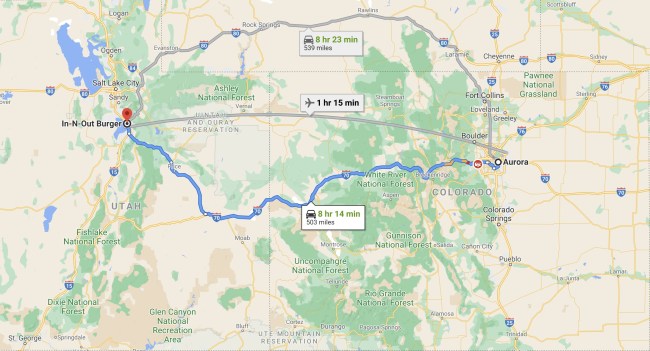 The line was insane. What would inspire someone to sit in their car for that length of time in such a manner baffles me.

Burger-lovers waited in long lines just to get a taste of the first In-N-Out in Colorado Springs. https://t.co/wFECI9OGGC pic.twitter.com/TxpPhQ6TMn

As is to be expected, people got impatient and tensions flared. Now, fights on the internet are everywhere and most are better than this one. However, this fight that broke out amongst In-N-Out starved persons in the drive-thru line is hilarious because one of the two involved lost his pants.

Imagine fighting another man in an absurdly long line for fast food and losing your pants. Now you’re standing there without pants, while security tries to calm you down. And then you have to get back in your car and sit there in front of the man who literally beat the pants off of you. If the 14-hour venture wasn’t a low point to begin with, this might be rock bottom.

Lmfao fights at Colorado’s new
In and Out #denver #Aurora 😂 pic.twitter.com/De7DhWkG8U