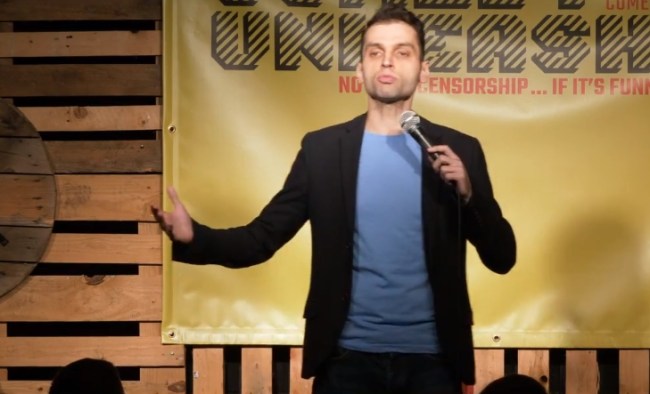 A stand-up comedian was asked to sign a “behavioral agreement” in order to perform at a comedy show at a college. Konstantin Kisin was warned about the “no tolerance policy” before the comedy gig. The stand-up refused to sign the behavioral contract because it was utterly ridiculous and he was not allowed to perform.

Kisin was scheduled to perform standup at the School of African and Oriental Studies (SOAS) at the University of London. The event, which was organized by Unicef on Campus, required the performers to sign a “behavioral agreement” outlining certain rules and topics that are not permitted to be broached because it could “offend” someone.

Kisin and the four other comedians received emails with the behavioral agreement that said: “This comedy night organized by aims to provide a safe space for everyone to share and listen to Comedy. This contract has been written to ensure an environment where joy, love, and acceptance are reciprocated by all.” This email does not sound like individuals who are capable of joy.

“By signing this contract, you are agreeing to our no tolerance policy with regards to racism, sexism, classism, ageism, ableism, homophobia, biphobia, transphobia, xenophobia, Islamophobia or anti-religion or anti-atheism,” the email states. “All topics must be presented in a way that is respectful and kind. It does not mean that these topics can not be discussed. But, it must be done in a respectful and non-abusive way.” Who is to be the judge and jury as to what is considered “respectful?” The humorless hack who books the shows for the college and wouldn’t know comedy if it smacked them in the face and screamed in their ear?

Are you ready for the kicker? Get ready. Kisin was giving his time and skills to the comedy show for FREE. This was an unpaid gig for charity.

Unicef on Campus released a statement: “Given that Unicef is a children’s charity, we wanted to make sure it was an appropriate event for the cause. We would never wish to impose that guests would have to agree to anything they do not believe in. We apologize for the misunderstanding.”

You wouldn’t burst into the cockpit of a commercial airplane before your flight or storm into your doctor’s office before surgery and deliver a written contract detailing what the pilot or doctor can or can’t do during flying or surgery. But for some odd reason, when it comes to professional comedians, people who know nothing about comedy are given carte blanche to tell professional comedians how to do their jobs. These humorless hacks are justified and empowered to dictate a comedian’s comedy because they are in charge of decreasing the opportunity for an audience member to get “offended” during the show and then fire off a tweet on how they were “assaulted by violent language” over a joke about pineapples.

Here is an example of the DANGEROUS comedy that Konstantin Kisin unleashes in his standup routine.

This comes less than a week after comedian Nimesh Patel had his mic cut less than 30 minutes into his routine at Columbia University because he allegedly told an “offensive” joke. The former Saturday Night Live writer delivered a joke during a stand-up gig organized by Columbia’s Asian American Alliance (AAA) that deemed to be “homophobic, racist, and unsafe.” Comedians should realize that colleges campuses are not safe spaces for them.

The infantilization of the college campus and incentivizing outrage culture doesn’t seem to be ending any time soon. Here is Australian comedian Steve Hughes with an outstanding comedy bit about how silly being “offended” is.