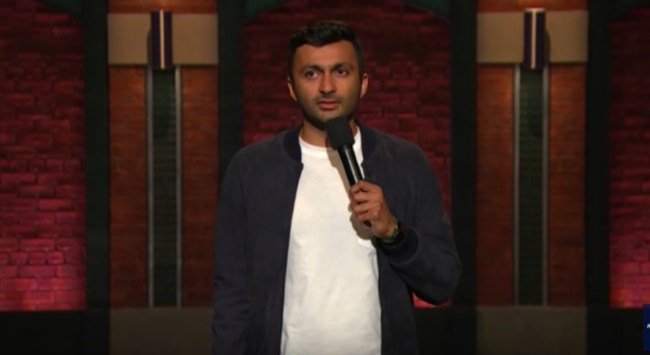 How much would it take for you to feel “unsafe” during a comedy show? Like moved to the point where you feel you are in a perilous situation. Maybe if the comedy began dousing the stage in petrol and reaching for a flame thrower. That would be unsettling and confusing, but if the exit doors were close enough, I may stick around to watch the fireworks.

Nimesh Patel, a comedian and former writer for Saturday Night Live, had his mic cut less than 30 minutes into his routine on Friday after Columbia’s Asian American Alliance (AAA) deemed his jokes homophobic, racist, and unsafe.

The AAA invited the 32-year-old to perform during the group’s annual charity event, “CultureShock: Reclaim,” which in hindsight is a very ironic name for an event this soft.

The Columbia Daily Spectator lists one of the jokes that the student-run organization deemed to controversial for students. Try not to puke.

During the event, Patel’s performance featured commentary on his experience living in a diverse area of New York City—including a joke about a gay, black man in his neighborhood—which AAA officials deemed inappropriate. Patel joked that being gay cannot be a choice because “no one looks in the mirror and thinks, ‘this black thing is too easy, let me just add another thing to it.'”

The joke features race and sexual orientation. This does not automatically categorize it as racist and homophobic, which it is neither. Clearly.

Here in Nimesh doing five minutes on Late Night With Seth Meyers. He is not exactly Bill Burr-level controversial.

A Columbia student named Liberty Martin wrote an long-winded Op-Ed about why she believed Nimesh deserved to get booed off the stage.

This is the issue with telling jokes about other people’s identities: It’s hard to grasp the intricacies of a life you haven’t lived.

This is exactly why Jerry Seinfeld and Chris Rock refuse to play at colleges, and also maybe because their fees are too high for colleges to afford (which John Mulaney believes is the real reason).

I don’t know why this one simple concept is so hard for people to understand: You don’t have a right to not be offended.