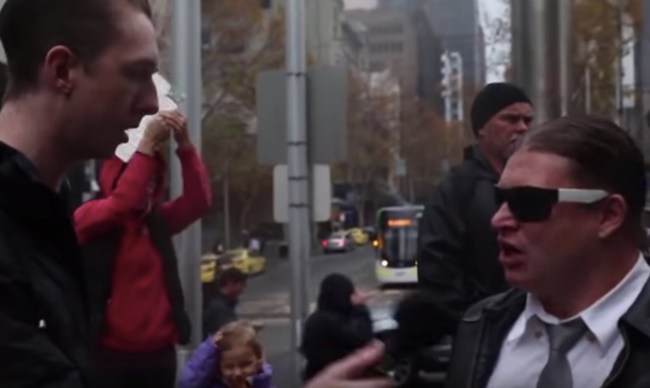 Australian comedian Lewis Spears recently had the time of his life trolling an anti-vaxxer rally while looking for an actual licensed medical professional. The premise of this is that anti-vaxxers often claim there are thousands of doctors out there who agree vaccines aren’t safe. Spoiler alert: there’s no such thing as a qualified medical professional who thinks vaccines are unsafe.

I actually spent a few moments questioning whether or not I should write this up for the website only because this, like shitting on Chemtrails Truthers, tends to bring out the craziest morons on the Internet. I don’t have a lot of patience for stupidity especially when it puts other people’s health at risk. Ultimately, I decided this had to be shared with you all because everyone needs to see how batshit crazy these people are.

For this video, Lewis grabbed his camera and went on down to the rally to do some man-on-the-street-style interviews, asking people if they are doctors. What he found is some of the craziest damn people you could ever imagine.

You have to give it up for people who spend 30 minutes on Google reading articles from websites like ‘feedmebullshitdotcom’ and ‘Iliterallymadethisshitupwhiletrippingballsonmushroomsdotnet’. These keyboard warriors believe their exhausting research is more informative than the consensus of every licensed medical professional on the entire planet, and they stick to that belief in the face of actual fact-based evidence.

I can already imagine the responses to this from the crackpot anti-vaxxer crowd: what makes you so certain vaccines are safe, you’re not a doctor??? Yeah, no shit. That’s why I trust the advice of every medical professional on the planet who are in unanimous agreement that vaccines are safe instead of choosing to believe the deranged theories found on websites that only exist to make money by feeding off the stupid.

Special shout out to the person who admitted they weren’t a doctor but went on to claim the status of ‘natural therapist’. This video wouldn’t have been possible without them. (h/t r/videos)