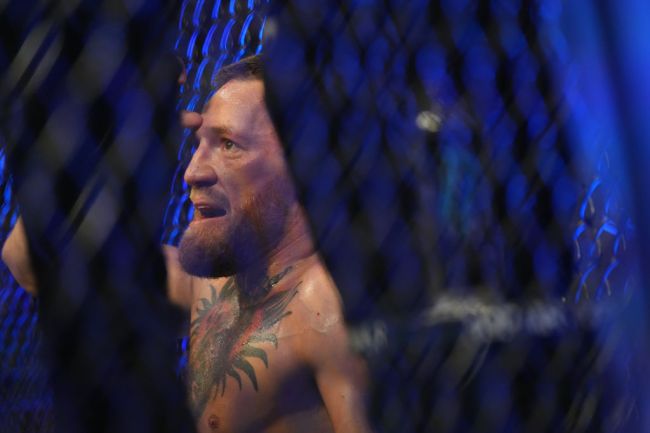 We now know why Dustin Poirier was so unhappy with Conor McGregor after their fight at UFC 264.

On Saturday night, McGregor was forced to withdraw from his fight against Poirier after suffering a gruesome leg injury at the end of the first round. Despite being injured on the ground waiting for a cart to take him to the hospital McGregor was still talking trash to Poirier.

In a new cage-side video released on the Internet, McGregor could be heard threatening to kill Poirier and his wife while making a gun motion towards his head after the fight.

NEW alternate angle of Conor McGregor threatening to kill Dustin and Jolie Poirier “in their sleep” and makes gun sign to his head:

Poirier talked about McGregor’s postfight trash talk during an interview with BT Sports.

“He was sitting there on the mat with a broken leg telling me that he was going to kill me still, like what are you doing bro? It’s disgusting man.”

During his postfight press conference Poirier vowed to fight McGregor again to make him pay for crossing the line with his trash talk.

Dustin Poirier wants to fight Conor McGregor again "We are going to fight again whether it's in the Octagon or on the sidewalk, you don't say the stuff he said" #ufc264 pic.twitter.com/OZA1uPQvEy