Reactions: The ‘Road House’ Remake Gets Even Weirder As Conor McGregor Joins The Cast 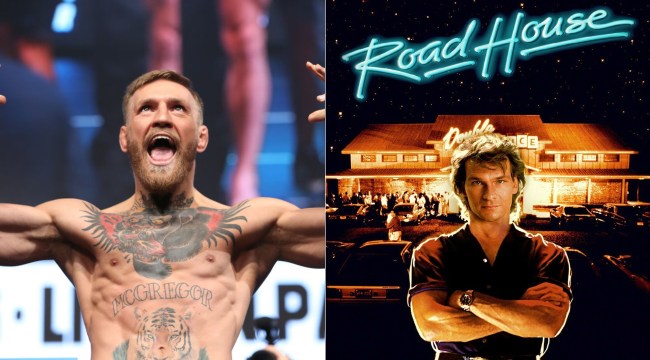 Yesterday, Prime Video officially announced a remake of the 1989 cult classic Road House with Jake Gyllenhaal in the starring role and Doug Liman (The Bourne Identity, Edge of Tomorrow) set to direct.

Naturally, given the affinity that movie fans have for the original Patrick Swayze-starring film, the reaction to the news of a remake was far from unanimously positive, to say the least.

To make the prospect of the Road House reboot even weirder, though, is the fact that former UFC Champion Conor McGregor is set to make his acting debut in the film. If you remember, when the idea of a Road House remake was being kicked around a few years back, former UFC star Ronda Rousey was actually attached to the lead role.

The new take follows a former UFC fighter (Gyllenhaal) who takes a job as a bouncer at a rough-and-tumble roadhouse in the Florida Keys, but soon discovers that not everything is what it seems in this tropical paradise. While exact details behind who McGregor will be playing are unknown, sources made it clear he would be playing an original character and not himself in the project. [via Deadline]

“Get out of me fookin roadhouse before I round kick ya back to ya mum’s arse lad” https://t.co/nZQEjX5P8c

"Hey, Dalton, that guy is eyeing you up pretty good over there."

Gotta play to his strengths. https://t.co/d1gNlP13Zo

Conor McGregor better be the guy who drops the line "I used to fuck guys like you in prison." https://t.co/KYSPWCLgkO

Conor is going to accidentally kill everyone on this set like Gordy in NOPE https://t.co/rmOEroYNun

Yo @FanDuel, what are the odds on @TheNotoriousMMA vs Gyllenhaal? https://t.co/CTj5AwNrzJ

In addition to Gyllenhaal and McGregor, Road House will star Billy Magnussen, Daniela Melchior, Gbemisola Ikumelo, Lukas Gage, Hannah Love Lanier, Travis Van Winkle, B.K. Cannon, Arturo Castro, Dominique Columbus, and Beau Knapp. At this time, while it’s unclear when the film will release, given that all the cast has already been put in place, production is set to begin in the Dominican Republic this month.