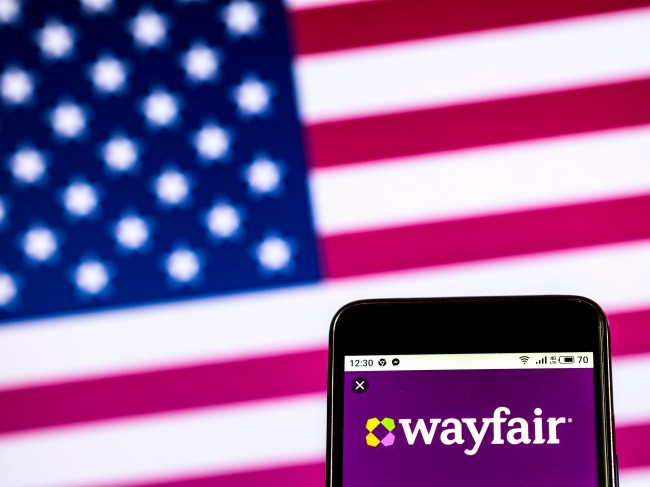 A post to the Conspiracy Theory subreddit involving a Boston-based furniture e-commerce company, pedophilic sex trafficking, and several industrial file cabinets has taken the culture by storm Friday. Yes, you read that correctly.

The bonkers theory is something Alex Jones may conjure up after a few whiskeys and enough psilocybin to taste colors, but it has gained enough steam that publications like Newsweek are seeking out a corporate response from Wayfair.

At the time of this writing, the topic has been tweeted about 72,000 times and is trending in the United States, and it all started with an inquiry redditor PrincessPeach1987 posted on Thursday.

PrincessPeach1987 posted a screenshot from Wayfair’s mobile website featuring four storage cabinets—products named Neriah, Yaritza, Samiyah and Alyvia—and pondered whether something insidious was behind the astronomical $12,699.99-$14,499.99 price for the units.

Is it possible Wayfair involved in Human trafficking with their WFX Utility collection? Or are these just extremely overpriced cabinets? (Note the names of the cabinets) this makes me sick to my stomach if it’s true 🙁 from conspiracy

One Twitter user bolstered the theory by posting screenshots matching the SKU number of a file cabinet to young girls on Russian search engine site Yandex.

Another posted screenshots of what appears to be Wayfair doing some site inventory clean up.

Another pointed out that the above pillow, named Duplessis, matched the name of a 13-year-old Michigan girl who went missing in May.

This wayfair shit is crazy. Who buys a $10,000 “zodiac pillow” named after missing children from the last couple of months. pic.twitter.com/StUOp5qcLB

This appears to not be a coincidence, but a business practice.

So I decided to look up Bungalow Rose myself just to figure that EVERY product they make is named after a missing child. Every single one. Not just the ones they sell on Wayfair pic.twitter.com/NvsA6Miqzj

Newsweek reached out to Wayfair after the conspiracy began trending on Twitter (at the time of this writing, 72,000 people are tweeting about it). The company’s response:

“There is, of course, no truth to these claims. The products in question are industrial grade cabinets that are accurately priced. Recognizing that the photos and descriptions provided by the supplier did not adequately explain the high price point, we have temporarily removed the products from site to rename them and to provide a more in-depth description and photos that accurately depict the product to clarify the price point.”

This isn’t the first pickle Wayfair’s found themselves in. Back in June 2019, Wayfair employees protested to the company selling furnishings to a Texas detention facility for migrant children. The detention center closed soon thereafter.

Have I been on the internet too long or is this whole saga creepy as all hell, real or not?

America is going straight hell for what they’ve done & continue to do children. I’m disgusted. @wayfair count your days bitch.