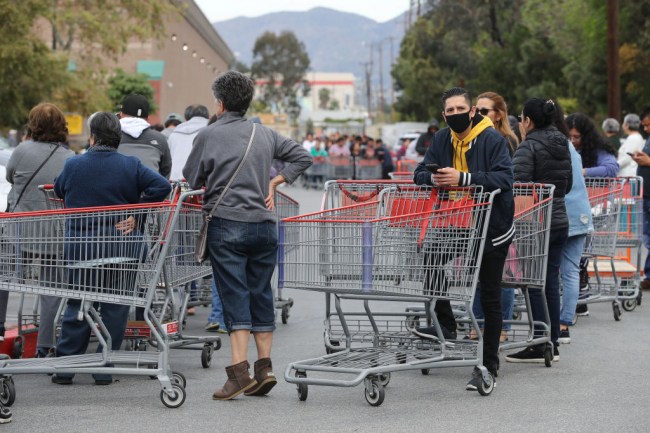 The coronavirus pandemic is a serious situation where people should take proper precautions (Read advice HERE) and be prepared if the outbreak gets worse. However, people shouldn’t panic, and you shouldn’t be buying seven years’ worth of toilet paper. The COVID-19 outbreak, which has less than 2,500 confirmed cases and 55 deaths in the U.S., has caused mass hysteria resulting in massive lines at stores, and people are brawling in Costco.

People are showing up in droves to their local Costco or Sam’s Club to stock up on food and supplies in case the COVID-19 outbreak hits home. That is equating to crazy long lines just to get inside of the membership-only warehouse clubs.

This is the line outside the Costco on Rosedale. The store is scheduled to open in roughly 90 minutes. pic.twitter.com/75qjsluFhY

No free food samples, was hit 84 times by moms with shopping carts, saw 2 fights, and left with only 3 bottles of wine and pre-made tacos. I will never look at Costco the same pic.twitter.com/LwjzmRiOuq

From my brother in SoCal: here’s a line over a half-mile long just to get inside Costco pic.twitter.com/tZj9P60OtB

If anime expo gets canceled I’ll just wait in a Costco line just to feel something https://t.co/pfMEQiBfw7

This is the line outside of a Costco in Cypress, CA.

Even long-stretching lines for Costcos in Canada where people had to wait in below-freezing weather.

And after you battle your way in, you’ll have to make a mad dash for the toilet paper.

Then after fighting everyone for the last package of TP, you’ll then have to wait in a ridiculous checkout line.

30 minutes after the Costco on Bardstown Road open, the check-out line literally stretches all the way back to the end of the store. pic.twitter.com/nRJQjki6wu

RELATED: Coronavirus Questions Answered: What Preventions Can I Take? Can My Pet Get COVID-19? What Supplies Do I Need To Stock Up On?

The lines are so long that people are calling 911 for help. The Santa Clarita Valley Sheriff’s Station had to inform people that the 911 emergency phone line is not to make complaints about the long lines at Costco.

The sheriff’s official Twitter account tweeted: “Please don’t call 911 because people are cutting in front of you in line at the store. It ties up valuable resources for real emergencies!”

Please don’t call 911 because people are cutting in front of you in line at the store. It ties up valuable resources for real emergencies!

All is calm over at Costco. Deputies checked it out. Yes, there are long lines but contrary to what a 911 caller said, there are no fights. pic.twitter.com/8HtOISmSmX

The police did not find anyone fighting or arguing when they got to the Costco. The same was not true for a Costco in New York. Customers got into a heated argument while in line at a Costco in Brooklyn.

RELATED: How To Live Your Life In A Coronavirus World – Can You Go To The Gym? What About Dating? Should I Go To Weddings?

Police were called to the Fairfield Costco in California after several fights broke out over shopping carts and toilet paper.

Check out the scene at the Fairfield Costco today. The store hit max capacity. Police called because fights broke out over shopping carts. One employee told me a fight also erupted when a man took the toilet paper from another shopper’s cart. #coronavirus Vid:Courtesy Phil Brown pic.twitter.com/a8pBHM8f2o

There was a nasty fight over toilet paper in Australia.

When your usual grocery shopping @woolworths turns into a toilet paper fight in the supermarket aisle. Yikes. #toiletpaperpanic for the #coronavirus has taken a whole new level. pic.twitter.com/aKJ283I20C

One shopper was seriously injured after they were involved in a fight at a Sam’s Club in Georgia. During the fight over a package of water, both men both grabbed wine bottles and began hitting each other. One person was stabbed with a broken wine bottle. One of the men involved in the brouhaha was seen being taken out on a stretcher.

BREAKING: A man was stabbed with a wine bottle over a pack of water at a Sam's Club in Hiram. 😳😳😳😳pic.twitter.com/KV5X7MiKpO

RELATED: Coronavirus Could Cause Male Infertility