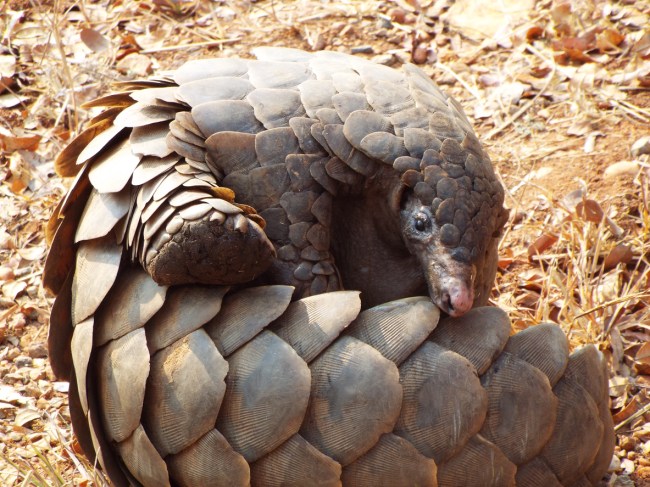 Pangolins look like a cross of an anteater, armadillo, and sloth, but with a hard scaly artichoke-like exterior protecting them. These insect-devouring mammals are one of the most trafficked animals in the entire world, more than 1 million have been trafficked in the last decade. Pangolin meat is considered a delicacy in China, and the animal’s scales are believed to have medicinal properties in several Asian countries. The high demand for pangolins, which are protected under international law, may have helped spread coronavirus, according to a new medical report.

Researchers from the South China Agricultural University in Guangzhou, China, claim that the current coronavirus killing hundreds around the world may have been started by human interaction with pangolins. Researchers, Shen Yongyi and Xiao Lihua, claim that the genetic makeup of the nCoV-2019 in humans infected with the coronavirus is 99% similar to the same virus in pangolins, the official Chinese news service Xinhua reported on Friday.

“Results showed that pangolins are a potential intermediate host of the novel coronavirus,” the state-run media reported.

#Pangolins may have spread #coronavirus to humans, researchers found https://t.co/9yTJOIkFU4 via @Guardian | The disease has killed over 720 people worldwide as of today, mostly in China.

Int'l trade in all 8 species of #pangolin is prohibited under CITES. 🎥by @greatbigstory pic.twitter.com/MaOTQlHUOS

The research has yet to be published in full, and other scientists are not sold on the all-too-quick analysis.

“This is an extremely interesting observation. Although we need to see more details, it does make sense as there are now some other data emerging that pangolins carry viruses that are closely related to 2019-nCoV,” said Edward Holmes, an evolutionary virologist at the University of Sydney, Australia.

“The evidence for the potential involvement of pangolins in the outbreak has not been published other than by a university press release,” James Wood, head of veterinary medicine at Britain’s University of Cambridge, told Reuters. “This is not scientific evidence.”

Many scientists still believe the animal that transferred the coronavirus to humans is bats. Whether bats or pangolins, the Chinese government has pinpointed the animal market in Wuhan as the ground zero of the deadly virus that has pneumonia symptoms. Both bats and pangolins are sold at the Wuhan market.

Some conspiracy theorists suggest that the coronavirus is actually a bioweapon that made its way out of the labs of the Wuhan Institute of Virology, and the Chinese government is using the market, bats, and pangolins as scapegoats.

There is another conspiracy theory that links a CBC news article from August 2019. Reportedly, two Chinese researchers at Canada’s National Microbiology Laboratory (NML) in Winnipeg, stole Ebola and Nipah viruses from the country’s only level-4 lab and sent them to China. There is no report that the Chinese nationals stole any version of the coronavirus from the lab.

The most recent update on the coronavirus puts the death total at 811, surpassing all severe acute respiratory syndrome (SARS) fatalities in the 2002-2003 epidemic. Total cases of coronavirus are up to 37,198.

Health officials from the United States have been extremely concerned, and worries grew this week when the first American citizen died from the coronavirus. A 60-year-old American woman, who was either living or visiting China, died in a hospital in Wuhan, China. The woman did have underlying health problems before getting sick with the coronavirus.

“We can confirm a 60-year-old U.S. citizen diagnosed with coronavirus died at Jinyintan Hospital in Wuhan, China, on Feb. 6,” a spokesperson for the U.S. Embassy in Beijing said.

There are currently 12 confirmed coronavirus cases in the U.S., including California, Arizona, Wisconsin, Illinois, and Massachusetts. There are also six potential cases in New York state.

One of the casualties from the novel coronavirus is 34-year-old Li Wenliang, one of the first whistleblowers that attempted to warn people of the dangers of the respiratory illness. Weeks before the Chinese government acknowledged the existence of coronavirus in Wuhan in mid-December, Li Wenliang was warning people about coronavirus on the Chinese social media platform Weibo. Li, who is an ophthalmologist, was one of eight doctors who were reprimanded by the Chinese government for posting information about the coronavirus. Li, who seemed to be in good health before the virus, died at Wuhan Central Hospital.

China is finally allowing outside help on the health emergency. The Chinese government will now allow the World Health Organization (WHO) to select a team of health experts to travel to mainland China to study the coronavirus and attempt to find a way to slow down the outbreak.

“These US experts have extensive experience working with the World Health Organization on a range of infectious disease outbreaks and epidemics, including Ebola, avian influenza, and SARS,” a spokesman added.