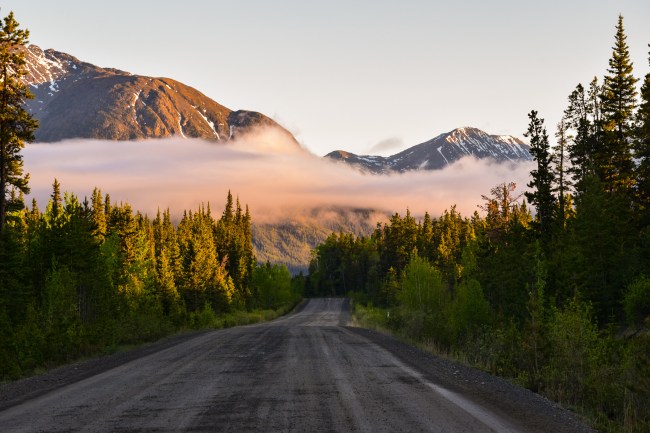 Every expert on the planet right now is telling people to stay home and stay safe. By restricting our daily movements and contact with others we stop the virus from spreading, it’s that simple.

It’s actually quite astounding how many people have trouble grasping this relatively simple idea. I’m down in Florida where pictures of crowded beaches pop up every day and the dipshit governor still won’t take drastic measures to isolate the population. I had to pick up a prescription at a CVS last Friday inside of a Target store and I was legit shocked to see that it was business as usual for Target shoppers. The parking lot was packed, people were shopping for things like toys and clothes, shoppers weren’t making any effort to stay 6-feet apart, and the store was just as busy as any other Friday.

Meanwhile, some people are going to the ends of the earth (literally) to isolate themselves. A couple from Quebec drove over 3,000 miles to Whitehorse, Yukon and then hopped on a plane to the tiny town of Old Crow which is home to only 280 people. They did this in an attempt to flee the coronavirus threat without taking into consideration that the locals wouldn’t want them there, that the town doesn’t have healthcare, and that it was a stupidly selfish move all around.

A Quebec couple who got off a plane immediately “looked out of place" in Old Crow, Yukon. Turns out, they were taking refuge from COVID-19.

“They perceived our community as a life raft from COVID-19,” chief of the Vuntut Gwitchin First Nation said. https://t.co/DhVaDvk5iU

“They perceived our community as a life raft from COVID-19,” Dana Tizya-Tramm, chief of the Vuntut Gwitchin First Nation, told the Star.

Townsfolk knew what they had to do: Isolate the couple and get them on the next flight out. In the Arctic community of roughly 280 people, Old Crow has only one nursing station and a doctor who flies in once every couple of months; they can’t risk the chance of a coronavirus outbreak.

About 48 hours later, police escorted the couple onto a plane, which took them back to Whitehorse. (via The Star)

A couple from Quebec drove across the country to Whitehorse, Yukon and then flew north of the Arctic circle to the remote, fly-in only Vuntut Gwitchin community Old Crow in an apparent attempt to protect themselves against COVID-19. This put our community at incredible risk.

Apparently they arrived on Friday with no food and nowhere to stay. They were placed in self-isolation in hotel rooms the co-op grocery store has for rent for visitors, and were sent packing on the plane today. I truly cannot comprehend the selfishness of some.

As a remote, northern community of less than 300 enduring colonialism, including a legacy of gross underfunding of critical infrastructure and services, our community is at greater risk to severe outcomes from COVID-19. Do not visit or seek refuge.

"Old Crow is a fly-in, self-governing community… Like many remote and northern communities, Old Crow has asked people not to come there in order to limit the potential for bringing COVID-19 with them." https://t.co/ihpXZbyPIy

“We were busy dealing with a life-altering pandemic, and this couple just strolls off the plane like cartoon characters,” said Chief Dana Tizya-Tramm. “Living on the land here is dangerous. It’s not like you wake up in the morning and birds dress you" https://t.co/26q2tdyams

"He said the couple had plans to live off the land, but no notion of what that actually entailed in the Arctic."

This behaviour is the worst example of dangerously entitled colonialism I've seen in a long time. Via @jwsthomson https://t.co/vMZJ7nFYvV

“The Star reached out to the couple Monday at the Whitehorse hotel where they’re in isolation. A woman answered the phone, but hung up. When the Star called later, staff said they were out for a walk”

This isn’t too far off from ‘Armed Mainers’ chopping down a tree and blockading people inside a house after assuming they could be infected with the virus. People don’t want outsiders showing up right now, ESPECIALLY if there’s ZERO access to healthcare.

It is pretty poetic that they traveled to the end of the earth only to be locked inside and then kicked out by the local police. I sincerely doubt they ever considered the locals, at any point, during their idiotic journey. This was all about self-preservation and that bit them in the ass because all they had to do in order to stay safe was keep their asses at home.

Don’t ‘flee’ the virus. Stay your ass at home. Sit on the couch. Ride this out like everyone else who is being responsible.