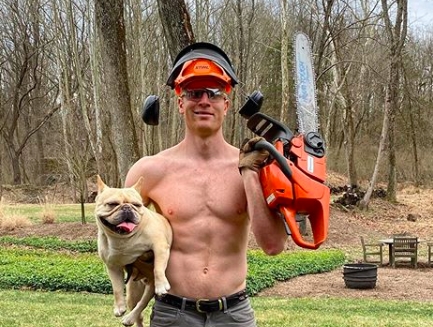 Off to fuck up the woods. Obey your thirst #StihlGotIt

Where was I on Friday night? Oh, haha. I… I was out for a walk. My chainsaw? Oh. I guess I did have it. Hm, to make sure there weren’t an dead trees at risk of falling on a power line. Yeah! It was windy, super windy. Can’t risk losing power these days, you know? Figured I should take the fight to them—them trees. Get ahead of it. Nobody to corroborate my alibi? Well, I guess that means there’s nobody to not corroborate my alibi. I say we call it even, detective.

Do I look like a guy who would see a group of dudes from New Jersey bunkering down on the lovely island of Vinalhaven, Maine, and barricade them in to protect my friends and family from the batman disease? I got nothing against New Jersey. What’s that? They have the second highest number of reported cases in the country? And my beautiful home state of Maine is 13th from last? Gosh, you learn something new every day. Didn’t know. Not a numbers guy. I like poems.

A Maine man said armed neighbors descended on his home and chopped down a tree to block his road and prevent him from leaving because they believed he may have coronavirus. https://t.co/ZaLpJHqcgL

CNN-The Vinalhaven residentsaid he went outside Friday to check why his cable service wasn’t working and found a tree blocking the end of his road, according to the Knox County Sheriff’s Office.

“While investigating the downed tree, a neighbor started yelling at him and a group of people showed up and began to gather around. Believing the group may be there to harm him, (he) fled to his residence and told his roommates what he had found,” the sheriff’s office said on Facebook.

The three roommates stayed in the home, where they used a VHF radio to contact the Coast Guard for assistance and a drone to monitor the group’s activity, the sheriff’s office said. Vinalhaven is an island town.

None of the roommates, who were from New Jersey and were renting a home in Vinalhaven while working a construction job since September, showed symptoms consistent with Covid-19, deputies said.

In all honesty, I had nothing to do with this. But I sure wish I did. That’s a scene straight out of the Mob song from Beauty and the Beast. Gaston rallying the villagepeople, singing “grab your horse, light a torch, screw your courage to the sticking place!” as he and the McCuskey brothers saw down a fucking tree, then get some more of the boys to drag it across the road.

All because the three out-of-towners down the road have New Jersey license plates. Might be the greatest “now youse can’t leave” in the history of forced travel bans.

PS- how about the New Jersey dudes sending out a fucking drone to see what was up? If you’re wondering about the quickest way to reignite the fear and anger of some Maine locals, it’s sending out a Decepticon to spy on them.