Craft Brewers Are Getting In On Legal Marijuana 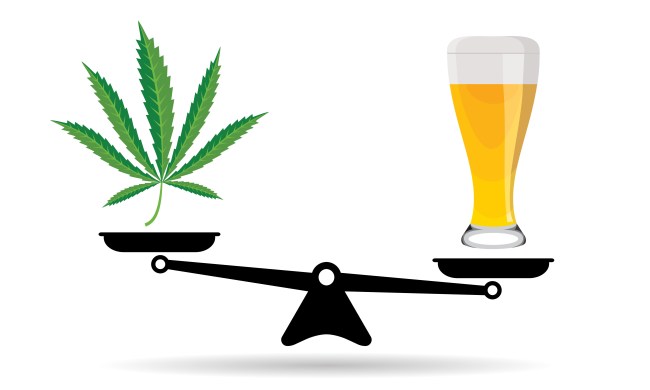 Depending on who you ask, there will come a day, in the not so distant future, when the great American boozehound trades in his lust for the liquor on a cannabis-infused lifestyle. Some so-called experts are of the opinion that this projected THC-takeover will strengthen the moral fiber of an otherwise depraved menagerie of wild-eyed society, not to mention prevent the further destruction of the population’s liver function.

While it is true that legal marijuana threatens to chisel away at some of the alcohol industry’s mega-profits, the concept of weed completely replacing beer, wine or even toilet hooch is a bit of stretch. There is simply too much beer-battered history stewing in guts of Uncle Sam to bring his nearly 90-year hangover to a screeching halt.

Considering the latest developments in the mad, mad world of the inebriation sciences, the most likely scenario for the future of socially acceptable feel good’s is a civil union between alcohol and marijuana that stands to create a master race of buzz-inducing libations. There is already evidence of this happening in the craft brewing industry.

Within this often-snobbish sector of the alcohol trade, “Domestic beer is piss water, bro,” brewers all over the country are working to meld the normal of sucking down subs with an up and coming competitor, legal marijuana.

Although considered a bit of a novelty at the moment, this experimentation in to the breeding of bud-soaked alcoholic beverages could come to inspire the next generation of intoxication.

According to a recent report from Forbes, the man responsible for creating Blue Moon Belgian White with the Coors Brewing Company in the mid-1990’s is now working to bring a new cannabis-infused brew to market. It is the first beer of its kind to actually contain THC — the part of the cannabis plant that produces stoned effects. Similar beverages have been produced over the past few years using pot’s non-intoxicating cousin cannabidiol (CBD). This particular ingredient, while never providing the user with psychedelic experiences, has risen to infamy for its therapeutic benefits.

Ceria Beverages founder Keith Villa, who spent more than two-decades with Coors, says his light brew contains various levels of THC and an ABV of around 4.5 percent. This combination of weed and alcohol should bring about the perfect mix of mayhem — our words, not theirs. Villa says his goal is to “bring cannabis to the educated beer-drinking masses.”

Even the New Belgium Brewing Company is getting in on the marijuana game. The company, which is known best for brews like Fat Tire and Voodoo Ranger, recently announced the launch of “The Hemperor HPA,” which is manufactured with hemp oil and contains an ABV of 7 percent. New Belgium initially expressed some interest in developing a beer that actually contained derivatives of the cannabis plant, but federal law and, of course, dreams of mass distribution ultimately put the idea in the crapper. Therefore, unlike Ceria, Hemperor is more just a nod to legal marijuana — it does not contain any component of the cannabis plant (neither THC or CBD) and does not produce stoned or euphoric effects. Basically, it tastes like marijuana but still only offers a beer buzz.

Since the federal government still considers marijuana an outlaw substance, brewers looking to attract widespread appeal have to be careful dabbling in cannabis-infused brews. Any beverage that contains THC or CBD compounds can only be distributed in a legal state. These types of products are also held to the same regulatory standards as other cannabis edibles and beverages sold in dispensaries. However, beers manufactured with hemp seed, such as The Hemperor, are perfectly legal and could starting show up on tap in areas of prohibition in the coming months.

Brewers all over the United States are running with the concept of near-cannabis-beer with rabid enthusiasm. It is a practice that has been picking up momentum ever since Colorado’s Dude’s Brew brought the creation to life back in 2015. Now brewers from east to west are getting involved, perhaps testing the waters for when marijuana finally becomes legal at the national level.

We already know that major brew houses are working to develop a new revenue stream using legal marijuana. Constellation Brands, which is one of the largest beer producers in the world, is presently developing cannabis-infused brews to market to Canadians when the country legalizes the leaf later this year. The company has invested around $200 million to make this happen.

Other brewers are simply standing on the sidelines, waiting see how legal weed shakes out in the northern nation. From there, these companies will be able to gain a better understanding of the process and potentially draft a more definitive plan for how Big Beer can capitalize on weed in the United States. It is even conceivable that one of these craft brewers currently experimenting with cannabis-infused beers could eventually become the King of Cannabis. We’re not going to lie, that sort of brand recognition could take awhile.

In the meantime, it’s easy to turn any beer into a cannabis-infused treat.