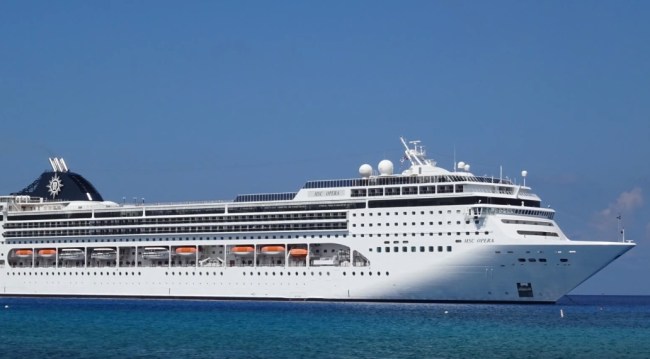 Usually, when you talk about smuggling something onto a cruise it is alcohol so you can avoid paying for booze on your 7-day fun trip. Like when you hide the alcohol of choice by pouring it into an empty and clean bottle of mouthwash, put some green food dye to make it look like spearmint-flavored mouthwash and glue the cap back on to make it appear as though the bottle was never opened or tampered with. At least that’s what I’ve heard and I’m definitely not saying you should do that because that is frowned upon by cruise companies. Some cruise passengers took their smuggling to the next level by transporting millions of cocaine.

Last week, 12 cruise passengers were caught in a drug bust. The six men and six women passengers were busted smuggling $2.6 worth of cocaine on board the MSC cruise ship. They hid the nearly 40 pounds of coke in Cheetos bags and ceramic bowls. Makes sense, there’s so much air and free space in bags of any snack foods.

The MSC Opera cruise ship was traveling from the Caribbean to Portugal. Once the ship docked at the Funchal port in Madeira, Portugal, the suspects were detained by police. The cruise made earlier stops in Havana, Cuba; Montego Bay, Jamaica; George Town, Grand Cayman; Cozumel, Mexico; Philipsburg, St. Maarten; and St. Johns, Antigua. You’d think they were smuggling marijuana with all of those Cheetos bags.

The UK’s National Crime Agency (NCA) announced the drug bust on Thursday in a joint operation with the Judicial Police of Portugal. “We believe this operation will have seriously disrupted an organized crime group looking to traffick cocaine into the UK and Europe,” Allan Round, NCA operations manager at the Joint Border Intelligence Unit, said in the release. All 12 suspects, ages 20 to 52-years-old, will face prosecution in Portuguese courts.

We believe this operation has seriously disrupted an organised crime group looking to traffick cocaine into the UK and Europe. Cocaine generates huge profits for criminals involved in street violence and exploitation, so stopping it will help reduce the harm caused by them.

Smuggling drugs on cruise ships is big business. You may remember the arrest of 29-year-old Isabelle Lagace and 24-year-old Melina Roberge. The Canadian women made headlines in 2017 when they were arrested and sentenced for attempting to smuggle 209 pounds of cocaine worth $21.5 million on a cruise ship during a 68-day multi-continent cruise. The Instagram models turned drug mules known as “cocaine babes” were sentenced to 7.5 years in an Australian prison.

Mélina Roberge was one of two “vacuous” Instagram-obsessed women caught smuggling 95 kilos of cocaine ($20M) into Australia in 2016. Her friend Isabelle Lagacé is currently serving 7.5 years, & her 65-year old “sugar daddy” will be sentenced in Oct. https://t.co/lrVSf4VJt6

Isabelle Lagacé sentenced to 7.5 years in prison for smuggling cocaine onto an Australian cruise ship. pic.twitter.com/iURB0M8SdQ