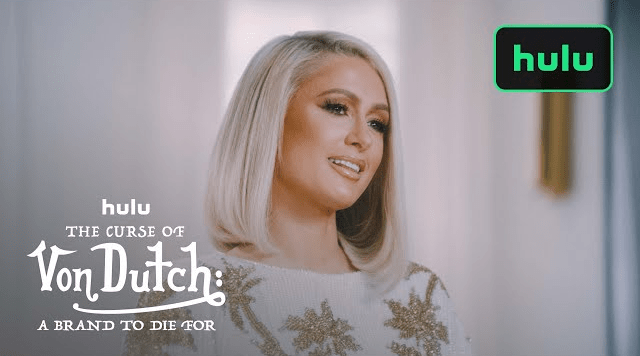 People of a certain age will see this story about a new Hulu documentary about the fashion brand Von Dutch and be transported back in time to the early 2000s when the world as we knew it was a very different place.

The Curse of Von Dutch: A Brand to Die For is being billed by Hulu as “the unbelievable true story behind the rise of the 2000s most iconic fashion trend.”

If you were in your teens or twenties in the early 2000s there were two not dissimilar fashion brands that dominated the landscape: Von Dutch and Ed Hardy. Part of the reason for that was because the same fashion designer, Christian Audigier, helped popularize both brands.

Audigier passed away in July of 2015 so he won’t be in The Curse of Von Dutch: A Brand to Die For, but one person who is also synonymous with and helped make the Von Dutch brand what it was, just for wearing it, will be: Paris Hilton.

“Von Dutch,” Paris Hilton says as the trailer begins, “was iconic for Y2K fashion. Trucker caps, jeans, jackets… that was like our uniform basically.”

Also featured in the trailer is none other than The Worm himself, Dennis Rodman.

“Everybody on the planet had Von Dutch,” says Rodman, who also was a big influencer of the time.

He’s not wrong either, as the numerous photographs of celebrities like Lindsay Lohan, Usher, Jay Z, Halle Berry and others shown in the trailer will attest.

The trailer also delves into the meteoric rise of Von Dutch, the parties, the private jets, the money (“north of a billion”), and as one of the main players Michael Cassel states, “The things that you dream about doing, I got to do it all.”

Unfortunately, as someone else states, “It was such an amazing achievement. The difficulty was, one of the co-founders was charged with first degree murder.”

Oh, and there’s also the fact that Cassell, Ed Boswell, and Bobby Von all claim in the trailer that they were the one to have created Von Dutch. Whoops.

Throw in a little money laundering, fist fights within the company, a connection with the Escobar family, and the question, “Did you ever have anyone killed?” and you’ve got yourself one hell of a story.

The first episode, “Who Created Von Dutch?” tells the story of a cocaine kingpin and a fledgling gangster who set out to launch a classic Americana fashion brand. Episode 2, “The Art of War,” follows the story as a new investor at Von Dutch sparks creative differences, a series of terminations, and murderous behavior. And the final episode, “Von Douche,” traces Von Dutch’s spiral out of control in the world of fashion as scorned former partners work to sabotage the brand.