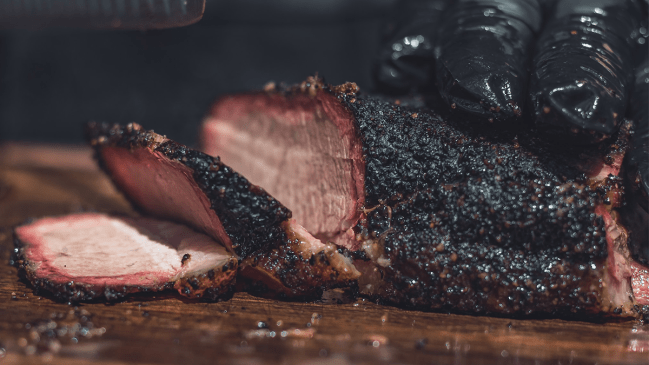 Americans may not have dreamed up the “slow and low” method of cooking meat in order to create some of the tastiest morsels your palate will ever have the pleasure of experiencing, but it’s hard to argue any other country has topped the good ol’ U.S.A. when it comes to mastering the art of the cuisine most people know as “BBQ” (not to be confused with the “barbecue” where your only options is a grilled hot dog or burger).

The United States is home to a number of defined regions with their own unique spin on the style. Memphis, Texas, Kansas City, and the Carolinas compose the “Big Four” that represent the most popular approaches, but they’re all united by a technique that usually involves spending a minimum of around eight hours keeping an eye on the briskets, ribs, whole hogs, and other cuts that cook inside the smoker containing the wood that imparts that signature BBQ flavor.

As Lincoln Riley knows all too well, barbeque aficionados can be a very discerning and critical bunch. As a result, you need to know what you’re doing if you want to compete with the best—a group that includes Clyde Cooper’s Barbeque, which has been serving up its wares in Raleigh, North Carolina since opening up shop in 1938.

While the restaurant is widely regarded as one of the best BBQ joints in the country, they can’t please everyone—including one customer who went viral for all of the wrong reasons after attempting to file one of the dumbest complaints imaginable with the police they called to the scene.

If you’re even somewhat familiar with the art of barbeque, you’re likely aware one of the hallmarks of a perfectly cooked piece of meat is the pink color that tends to signify whoever smoked it knew what they were doing (if you’re curious about the science, here’s a more thorough breakdown).

Of course, there are plenty of people out there who refuse to consume any meat sporting the slightest traces of pink due to largely antiquated safety concerns. If you’re in that camp, your best bet is to probably, you know, just not go to a BBQ restaurant, but that didn’t stop one woman from making the trip to Clyde Cooper’s and subsequently sparking some of the most idiotic drama you’ll ever encounter.

The restaurant summed up the situation in a Facebook post where it revealed the customer in question not only called the police to complain about getting pink meat at a BBQ joint but made the bold decision to leave a one-star review online in a truly stunning display of pompous ignorance.