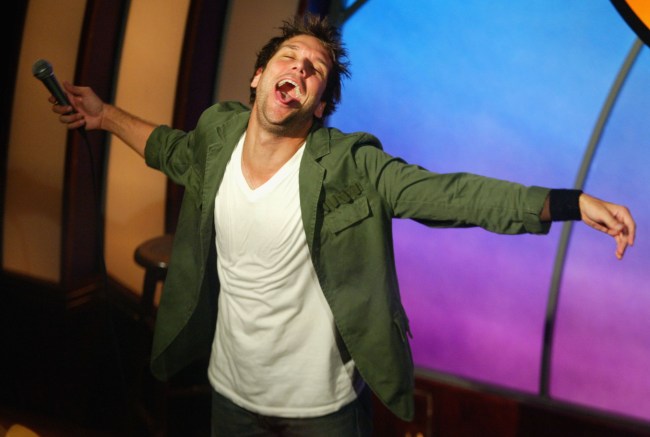 Disclaimer: I know I’m like one billion internet years late to this news, but I learned that Pittsburgh has an ‘h’ at the end like last Tuesday so BACK OFF.

Today I learned that Dane Cook, a 47-year-old man, has never had one sip of alcohol. Yes, that Dane Cook, the guy whose comedy act is the visual manifestation of an 8-ball of cocaine wearing a chain wallet and a flat brim while drinking a Monster energy.

Dane has probably revealed this many times before, but I first learned about the comedian’s 17,200+ day sober streak by way of the video below.

Learning that Dane Cook has never once had a sip of alcohol is like hearing Hugh Hefner is a virgin or the guy at my gym with the lifted Ford F-150 and “My other toy has tits” bumper sticker has a big hog.

The guy was a fucking comedy rock star all throughout his 20s, working nights and hanging with comedians who are, by nature, notorious degenerates. How many times can one man possibly say “no” before caving, if for no other reason than to shut people up? If every day someone asked me if I wanted a finger in my butt, I’d say no for like the first year-and-a-half, and then I’d slip a pinky in just to know for myself what all the hoopla was about. And fingers-in-butts isn’t as widely accepted as adults drinking libations, except when my girlfriend is out of town and I’m whacking it in the shower I mean what?

If this news isn’t blowing your top off, lets try a visual exercise.

You just woke up from a 10-year coma. The doctors come in to check your vitals and brain function. They show you two images of celebrities and ask you which one has struggled with alcoholism. These are the two photos you are shown.

THE CORRECT ANSWER IS FUCKING HARRY POTTER AND NOT THE GUY WHO LOOKS LIKE HE HITCHHIKES TO DAVE AND BUSTERS.

I don’t know how long it will take me to process this information and come to terms with it, but for now, up is down, left is right, and grown man rat tails are en vogue.

All I know is that all hope is not lost for Dane to come over to the dark side. Oh wait, never mind. If sending your own brother to prison doesn’t send you into an alcohol-fueled tailspin, I think you’re too far gone.