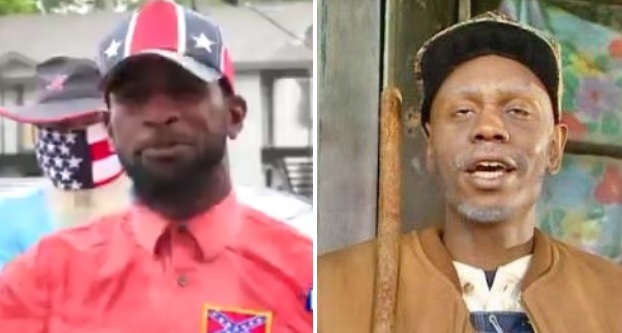 Dave Chappelle is a prophet.

Back in 2003, Chappelle wrote his most famous “Chappelle’s show” sketch about a Black white-supremacist who was raised in an all-white house for the blind unaware of his skin color called Clayton Bigsby.

On Thursday afternoon, an interview with black “Sons of Confederate Veterans” member Daniel Sims went viral after he was compared to Bigsby for his views on the Confederate monuments.

During the interview, Sims says he was raised in all-white schools and he would defend Confederate flags/monuments with his life.

A perspective on confederate monuments you probably haven’t heard before. Thoughts? pic.twitter.com/wZmswcWv8x

My whole family’s white, went to all-white schools, grew up in all-white neighborhood. My grandfather was white, and he’s the main one who fought in this war here, and he taught me everything I know,”

“Regardless how the next person feels, I’m not gonna take my flag down. If I got anything to do with it, ain’t no monument gonna come down,

“It may make my blood boil, if they just come up here and feel like they can tear it down. I don’t see me still living if they do that right there,” “That monument ain’t hurting nobody. That monument ain’t killing a soul. It ain’t talking bad to nobody. It ain’t even racist.”

The Internet immediately had jokes about how Sims reminded them of the famous “Chappelle’s Show” character.

This right here shows you how much of a genius chappelle is 😂 Clayton bigsby all over again https://t.co/uzCg8owyrl

Dave Chappelle was way ahead of his time… dude is a real life Clayton Bigsby pic.twitter.com/Hu4fKfmzSu

This is why Dave Chappelle is the goat..Clayton Bigsby you ain’t fooling nobody 🤣🤣🤣🤣 https://t.co/vqtYw1Us4y