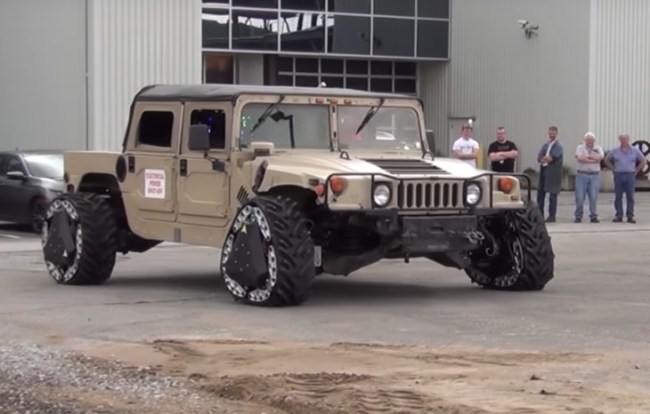 The Defense Advanced Research Projects Agency, better known as DARPA, is the Pentagon’s mad scientist laboratory for creating unconventional technological advancements that provide the United States with an advantage on the battlefield. DARPA unveiled six new innovative technologies this week that will enhance ground vehicles in the future of combat.

One of the advancements that were rolled out this week was the Reconfigurable Wheel Track (RWT), which instantly transforms wheels into tank tracks without having to stop the vehicle. Should a military vehicle encounter tough terrain such as rocks, sand or mud, the RWT can switch from wheels to tank tracks on the fly for improved traction. In the demonstration, a wheeled Humvee is morphed into a tank track Humvee in only two seconds. The round tires transform into triangular tank tracks. So you can go fast in the wheel mode, then lock the wheel hub for rough terrain. The RWT was helped created by Carnegie Mellon University’s National Robotics Engineering Center (CMU NREC).

Another remarkable achievement is Pratt & Miller’s Multi-Mode Extreme Travel Suspension (METS) that allows combat vehicles to comfortably glide over any bump in the road or off-road. This dual suspension system can give the vehicle six inches of regular off-road bump handling, but when things get bumpy there is an active high-travel suspension that provides each wheel an insane six feet of clearance. In the demo, the vehicle used standard 20-inch rims and easily handles all terrain in its path.

There is also an electric in-hub motor that improves speed and maneuverability, plus has a liquid-cooled brake system. Another innovation is the Enhanced 360-degree Awareness with Virtual Windows which allows the driver of the vehicle to be safe in the cockpit with armor all around instead of vulnerable windows. The drivers have a 360-degree view of their surroundings with VR goggles. Another tech is Virtual Perspectives Augmenting Natural Experience (V-PANE) system gives drivers a 3D image of their environment from different perspectives from numerous video cameras and LiDAR sensors. Lastly, there is the Off-Road Crew Augmentation (ORCA) system for small vehicles speeding down narrow trails. ORCA scans the trail ahead of the vehicle and advises the driver of the fastest and safest routes to go down.

All of these advancements are the result of the Ground X-Vehicle Technology (GXV-T) program that started in 2014. The initiative by the Department of Defense’s innovative agency was to create combat vehicles that are faster, lighter, with more agility, and more capable in the battlefield. The future of the U.S. military looks to be extremely formidable in the years to come.