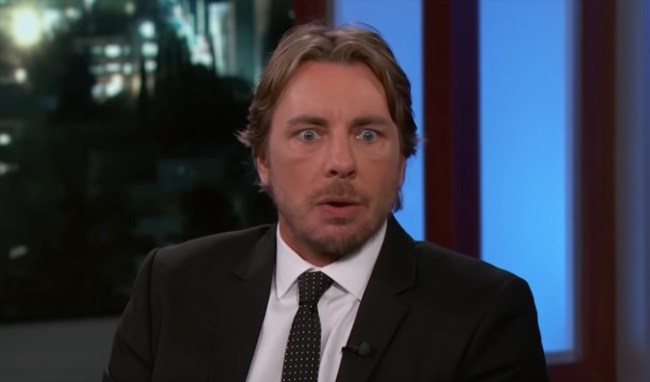 As a guest on Jimmy Kimmel Live last night, Dax Shepard was busting out all his best stories about his wife Kristen Bell. They’re one of the most popular and beloved celebrity couples because they’re both extremely successful and super quirky. Dax tells the story about his wife’s peculiar pool habit before turning the topic to how she had him convinced for the first stage of their relationship that she has fake boobs (she doesn’t) because she repeatedly told him she has fake boobs (she doesn’t).

Dax and Kristen have been married for 11 years and he JUST found out his wife’s a serial killer. I mean, she has to be a serial killer based on this latest revelation because that’s the only reasonable explanation for this behavior. She wears gloves in the pool. With the recent heat wave crushing Los Angeles, Kristen Bell decided to get in the pool with their kids. Dax thought his wife didn’t like swimming in the pool. As it turns out, she just doesn’t like getting in the pool without her gloves….Totally-normal-non-serial-killer-psychotic behavior. I think I’ve spent half of my life sitting in pool. My earliest childhood memories were floating in pools, swim camp, and later the swim team. I cannot fathom a life of pool gloves.

Here’s that Instagram photo of Kristen’s pool gloves if you want to get a better look: