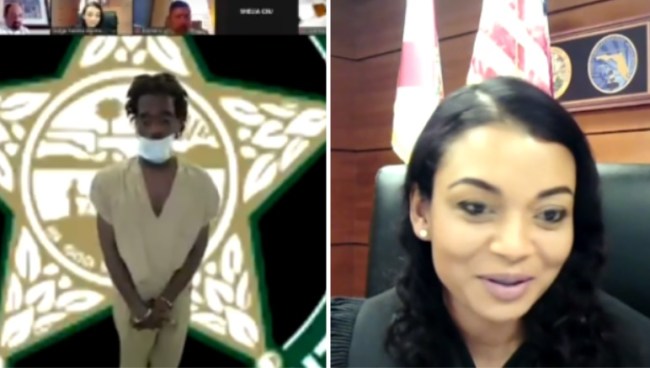 A defendant tried his best to flirt with a judge in bond court but unfortunately, it didn’t work out so well for him.

On Thursday morning defendant Demetrius Lewis appeared before Broward County Judge Tabitha Blackmon on Zoom and immediately starting laying the moves on her.

“Judge, you [are] so gorgeous, so gorgeous judge, I just had to tell you. You’re gorgeous,”

The judge wasn’t having it and thanked Lewis for his comments by saying “Flattery will get you everywhere, but maybe not here”

SHOOTING HIS SHOT – A defendant apparently tried to make a move on a Broward judge during his bond court appearance this morning, but he didn't seem to get very far. 😂

The judge listed Lewis’s bond at $5,000 as he faces a charge of attempted burglary of an occupied dwelling.

Of course, the Internet had plenty of jokes about the interaction.

the way she started reading off them charges 💀💀💀 https://t.co/G7Hn4ecXvt

Aye man.. every shot not taken is a shot already missed https://t.co/d47Qqq9fCz