A Delta Passenger Who Hit A Flight Attendant In The Face Over Mask Dispute Is Facing $27,500 Fine 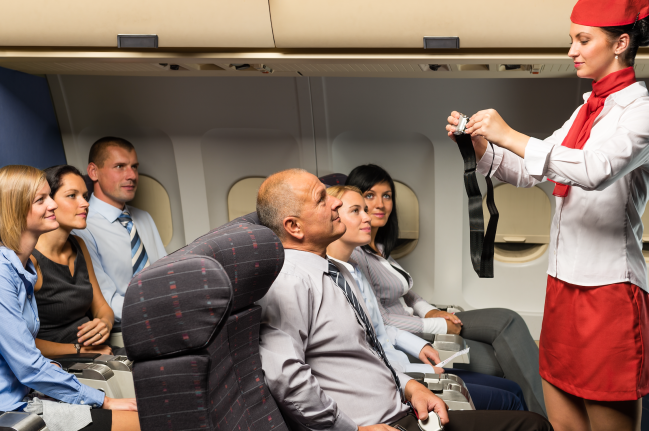 Been a while since your last flight? It’s different now. Lots of changes. You have to wear a mask and there’s no guarantee you’ll get your ginger ale. But there’s one big rule that has NOT changed: you’re still not allowed to hit the flight attendants in the face.

A Delta passenger is facing a $27,500 fine for hitting a flight attendant in the face over a face mask dispute, the U.S. DOT's FAA said on Friday.https://t.co/gmc0LiaqaJ

A Delta passenger is facing a $27,500 fine “for allegedly interfering with and assaulting a flight attendant,” the U.S. Department of Transportation’s Federal Aviation Administration said on Friday.

According to the FAA, the passenger was accompanied by another passenger who refused to use his face mask, secure his seat tray table, and fasten his seat belt during the flight, as advised by the flight crew.

As a result of his actions, the flight was ordered to return to the gate and the two passengers were asked to voluntarily get off the plane.

Maybe I’m a simpleton but I don’t understand how this continues to happen. When you fly these days, you receive so many notifications, emails, and warnings that you HAVE to wear a mask. As you’re buying your ticket, the airlines tell you the deal. As you’re checking, they remind you of the deal. As you get on the plane, another reminder. So it’s not as if they’re unaware that they’ll be forced to wear a mask on the plane. You know what you’re signing up for.

I’m sure that after crushing five bloody maries, you might decide you’re tired of feeling the wet mask against your upper lip. Maybe you feel emboldened to take a stand. But this guy didn’t just refuse to wear a mask; he wouldn’t secure his tray table, nor would he wear his seatbelt. At that point, we’re talking about a full-on anti-airplane anarchist. Not quite a terrorist, but someone who refuses to follow even the most basic rules of flying. Won’t put your tray table up?! What is this, 1958?!! Guy’s probably smoking cigs in the bathroom and packing box cutters in his carry-on.

Look, you’re not supposed to hit anyone. But there are a few people you really can’t hit. Bus drivers, subway operators, ferry captains, and pilots/flight attendants are at the top of that list. Anyone involved in transporting you from one place to another is off-limits. Most people know that because they remind us all the time. “As a reminder, the penalty for assaulting a transit worker is punishable by up to 45 lifetimes in maximum security prison.” It’s tattooed in our brains. Thus, we don’t punch people at the wheel.

$27,500 seems about right. That’s an expensive flight, especially for what I assume was a coach ticket.