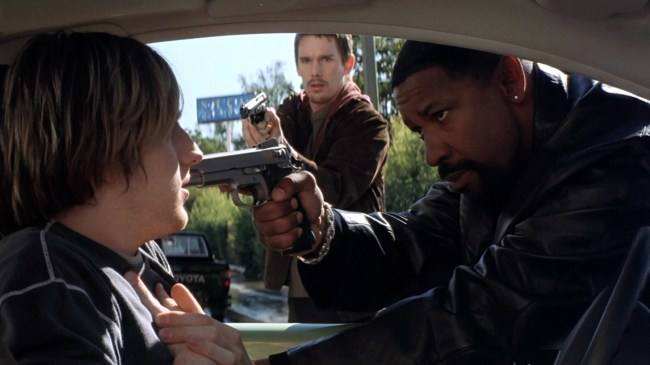 Despite starring in a litany of iconic roles throughout his now-five-decade-long career, Denzel Washington’s performance as Alonzo Harris in the 2001 crime thriller Training Day arguably remains his most notable, as both the film and the character remain culturally relevant to this day. People *still* say “King Kong ain’t got s**t on me!” A personal favorite of mine is, “Mmmm, I’m THIRSTY.”

According to Washington, though, the role actually wasn’t really meant for him, as he said during a recent interview that he doesn’t believe the part of Alonzo Harris was originally written for a Black man, and that it was director Antoine Fuqua who “brought gangster to it.”

“I don’t think it was written for a Black guy. It was more like a plaid-shirt [wearing] guy with beer bottles in the back,” Washington said in a recent interview. “Antoine [Fuqua]  was the one that brought gangster to it.” [via The Hollywood Reporter]

Fuqua’s vision for the character and the film would go on to define it and Washington would go on to win his first Academy Award for Best Actor (he’d previously won Best Supporting Actor for his work in 1989’s Glory).

At the time of this writing, Training Day is currently streaming over on HBO Max if you find yourself in the mood to watch it.