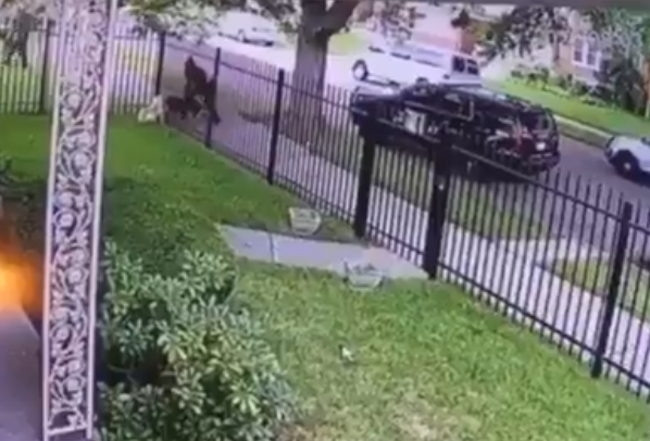 Warning – Though grainy, the following footage is incredibly disturbing.

The horrifying footage of a Detroit police officer is going viral after Ring doorbell footage shows the moments the officer opened fire on a dog through a iron fence.

The Detroit Free Press is reporting that the white dog in the yard got into an altercation with the K9 through the fence, and instead of pulling the police dog away, the officer pulled her weapon and opened fire.

The officers had been searching the neighborhood for a suspect’s illegal weapon they believe was tossed into a yard, the outlet reported.

The responding officers are claiming to have approached the white dog’s yard and asked the homeowner to secure the dog so they could search for the illegal weapon. While waiting for the owner to remove the dog, it attacked, prompting the officer to open fire.

Here’s the footage from the incident.

A Detroit police officer shot someone’s dog that posed no threat inside its own fence after he lost control of his own K9.

This officer should be held accountable. He should be fired and prosecuted. pic.twitter.com/28D4TuiMmy

I completely understand the feeling and idea that the K9 is a police officer, and causing harm to the dog is equal to injuring an officer of the law, but the perpetrator, in this instance, is another dog behind a damn face. A dog who doesn’t understand what a police dog is and doesn’t know why a strange dog is sticking his nose in the fence.

The Detroit Police Department is defended the cop, saying she was only trying to protect the K9 officer.

Detroit Police Commander Darin Szilagyi told the Detroit Free Press, “Her partner was being attacked and we demand that our officers protect not only themselves but their partners and citizens. At this point it was a clear and present danger; her dog was being viciously harmed.”

“It’s unfortunate it came to this,” said Szilagyi. “We don’t like to see any animal hurt.”