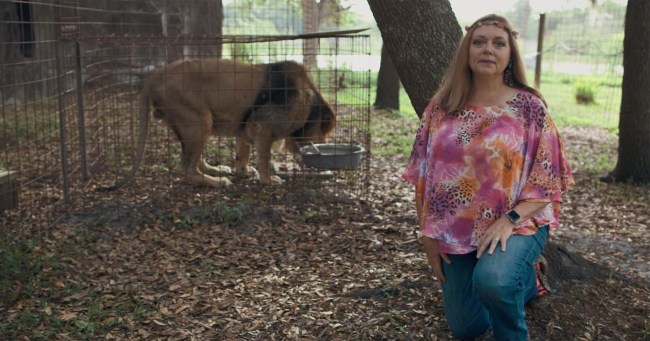 According to a press release, Discovery ID’s new series will be called ‘Investigating the Strange World of Joe Exotic’ and will mainly focus on the disappearance of Carole Baskin’s husband Don Lewis.

“Love her or hate her, Carole is now in the center ring of the big cat circus,” ID said in a statement. “Is she a selfless crusader and protector of animals, who found unimaginable strength despite the mysterious disappearance of her husband? Or are we witnessing Carole Baskin’s master plan finally take effect? Despite her claims of innocence, did she orchestrate the disappearance of Don Lewis to seize control of his fortune, consolidate power and lay waste to her foes? No one seems to be talking – except for one man – and that man is the center of ID’s upcoming investigative series.

Investigating the Strange World of Joe Exotic will feature the Tiger King himself Joseph Allen Maldonado-Passage and promises to cover more topics from the Tiger King series.

The investigation you didn’t get to see, revealing the secrets only Joe knows, the exclusive footage that has never been shown, and the search to answer the one question every person in America is asking themselves right now: although she’s denied it, is Carole Baskin responsible for the disappearance of her husband, Don Lewis?”

“What skeletons is Joe still hiding within his untold past? Is his conviction truly justified? Who is Jeff Lowe and what does the FBI really know? What secrets lie hidden within Doc Antle’s walls?”

While Discovery ID is calling their series a “sequel”, nobody who produced Tiger King on Netlix is associated with the project. As of now there’s no set airdate for Investigating the Strange World of Joe Exotic