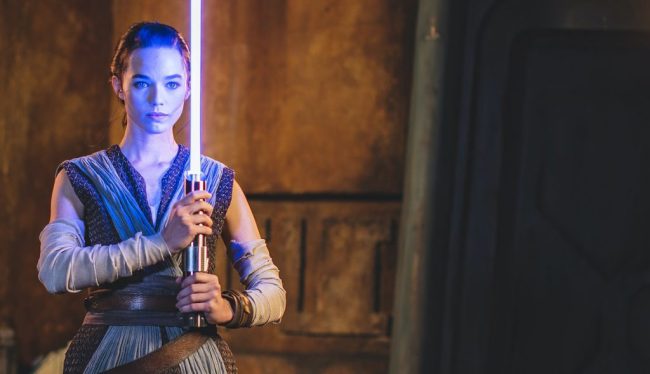 For someone who works on the internet, I’m actually I huge anti-technology guy. BIG anti-technology guy. I’ve often been quoted as saying I wish I grew up in the 80s and 90s instead, particularly the latter decade. The thing about the 90s is that there was enough technology where we were beginning to dip our toes in the water of the future, but not deep enough into the pool to drown ourselves like we currently are.

All that said, however, I am all in on this (apparently) real Lightsaber that the geniuses at Disney have somehow concocted. Total Junk Fact here — a junk fact is something that sounds so true that despite not being able to actually confirm it, I roll with it as fact anyway — but I remember once reading (Maybe I saw it on 60 Minutes? I don’t know) that in order to create a real lightsaber, it’d need to be housed in a warehouse or a hanger or something like that.

Unsurprisingly, science and technology have far exceeded those expectations, as Disney will be unveiling this groundbreaking Lightsaber technology to the world next year when the ‘Star Wars: Galactic Starcruiser’ ride at Walt Disney World Resort opens in 2022.

The groundbreaking lightsaber technology will be used on the ‘Star Wars: Galactic Starcruiser’ ride at Walt Disney World Resort beginning in 2022. #MayThe4thBeWithYou

Here’s the official explanation of how the Lightsaber fits into the ride, via Disney Parks:

Yes, that’s a new type of lightsaber Rey is holding in her hand, created by Walt Disney Imagineering Research and Development. Guests who experience Star Wars: Galactic Starcruiser will be the first to see it in action – along with so much more – starting in 2022 when this amazing new two-night adventure debuts. Watching that lightsaber activate right before your eyes will be just one of the countless ways that, from the moment you arrive to the moment you depart, you’ll be plunged into a Star Wars story where your decisions and actions – or even the casual conversations you may have – determine how your personal journey unfolds.

As your journey continues, you’ll have the opportunity to train in the ancient ways of the lightsaber, learn more about the inner workings of the Halcyon starcruiser and even jump on a transport to the planet Batuu to further your adventure inside Star Wars: Galaxy’s Edge. This isn’t storytelling – it’s storyliving, where you’ll see, feel and live Star Wars in a whole new way.

Now I finally understand why people have kids: so they can go to Disney World. Right?