Today In ‘Well, No Sh*t!’: Disney Is Reportedly ‘Uncomfortable’ With Their Recently Acquired Hitler Movie! 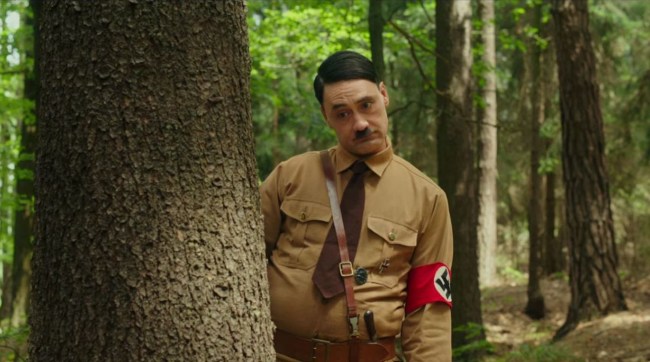 Folks, you can file this one under “Well, no shit Sherlock” (who is thankfully owned by Warner Bros.): a recent report from Variety states that the higher-ups at The Mouse House are allegedly, uh, uneasy about Taikia Waititi’s new satire film Jojo Rabbit, which just so happens to feature Adolf Hitler as the main character.

Following their $71.3 billion purchase of Fox back in March 2019, Disney now owns everything under the Fox banner, including its movie studios 20th Century Fox and Fox Searchlight.

Fox Searchlight is essentially the indie branch of Fox, as it serves as the arm of the company that is focused on making “prestige” films, which is obviously one of the few areas that Disney’s movie division lacks outside of the animation department.

However, according to a recent report from Variety, one of Searchlight’s biggest movies of the year — projected award season contender Jojo Rabbit — is causing some discomfort at the head of the snake mouse.

“The scathing takedown of Nazism may, however, prove a little too edgy for Disney brass accustomed to producing movies suitable for parents and kids. Searchlight has started to screen the film for its new parent company. Halfway through one recent viewing one executive grew audibly uncomfortable, worrying aloud that the material would alienate Disney fans. His unease may have been over the film’s cutting-edge satire, but it was also an expression of the culture clash taking place as the two studios embark on their new union.” [Variety]

Look, Disney, I know I’m not really in the position to tell you how to conduct your mind-blowingly successful business, but let’s sack up a little bit, shall we? Whatever happened to freedom of expression? Sure, Hitler is certainly a dicey subject to broach on film, but it’s not like Waititi (Thor: Ragnarok) — who’s known for his irreverent comedic sensibilities — is making a Nazi propaganda film. It’s literally a satire!

In all likelihood, the film is probably going to shred Hitler, his ideologies, and those who share them to absolute pieces. As it should.

Jojo Rabbit is set to be released in theaters in the United States on Friday, October 18.