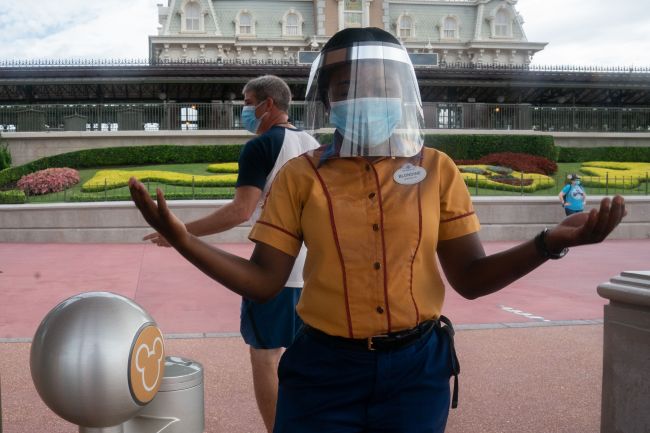 I remember a workshop in my English class during my Freshman year of college at SMU (what up, Perkins!) where we were given some essay about how all the snakes were removed from Disney World as just one aspect of the park and brand maintaining a picture-perfect appearance. Seriously, the essay was all about how they removed every snake from the area way back in the day.

More recently, Disney has caught and removed hundreds of alligators to keep everything looking perfect. So I wasn’t at all shocked by the news that Disney’s been photoshopping masks onto maskless riders at Disney World but it still creeps me out. I’m pretty sure I watched a kid get paralyzed at Epcot when I was in H.S. but I’ll tell that story below and how it relates to this, but for now let’s talk about Disney photoshopping masks onto people.

Florida has virtually zero restrictions in place to combat the pandemic at this point. For months now, the state’s governor, Ron DeSantis, has left it up to individuals to look after themselves. There are no state, city, or county-wide mask mandates. There are no capacity restrictions on bars, restaurants, or stadiums. Life is marching on the same as ever here in Florida.

Guests at Disney World are required to wear masks at all times, a park policy, but some apparently opt to take their masks off during rides. Disney’s reportedly been photoshopping oversized masks onto those riders so that it appears as if everyone is wearing a mask at all times, but they’ve announced they’re going to stop this strange policy according to WDWNT:

Walt Disney World is no longer placing digital face masks over maskless guests in on-ride photos. Just a short time after they started “enhancing” photos to add digital masks to unmasked guests, it seems the experiment is over. Disney has released an official statement regarding the change:

“In response to guest requests, we tested modifying some ride photos. We are no longer doing this and continue to expect guests to wear face coverings except when actively eating or drinking while stationary.”

The digital face mask enhancements were initially rolled out to Buzz Lightyear’s Space Ranger Spin at the Magic Kingdom and aboard DINOSAUR in Disney’s Animal Kingdom. (via WDWNT)

Again, I’m not at all shocked by the policy I’m just creeped out. Ever since I was a Junior in H.S. at the ‘China’ area of Epcot in Orlando waiting for dinner and watched a horrifying scene unfold. I was on vacation with a friend’s family, there was an acrobatics show as we waited for our dinner reservation with two vertical poles and another pole going across almost like field goal posts. A young kid was attempting to do a backflip from one pole to the other, missed the landing and fell probably close to 15-feet down and landed on his neck and his body started immediately convulsing in ways I can’t even describe. I’m still shaken to my core about that sight and it’s been like 20 years.

Before anyone knew what was happening, a medical team had shown up with a stretcher, covered him, and whisked him away and the acrobatics show kept going on as if nothing had ever happened. I Google this from time to time to see if there was any news about it and there was nothing written about the incident. I stood there, mouth agape, fairly certain I’d just watched a kid younger than me die or become paralyzed for life and I never read a single report of it.

According to Gizmodo, it’s unclear of this photoshopping policy took place at any other Disney parks or what their mask-policy is moving forward but they are going to stop photoshopping masks for now.