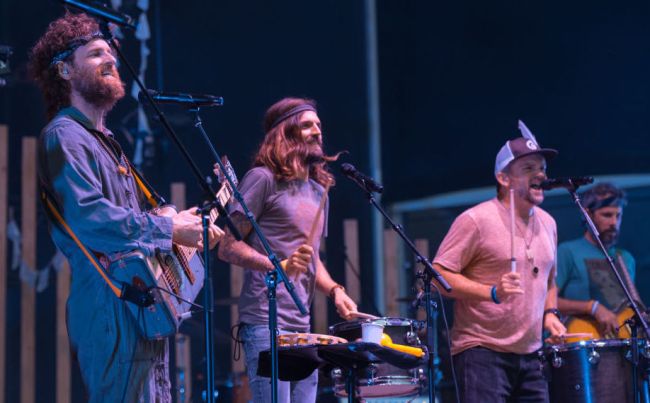 About a week before the end of October rolled around, Dispatch unexpectedly dropped a new song, which came as quite a surprise to me because I had sort of forgotten Dispatch was still a thing.

I soon realized I had the same thought a couple of years ago when the band dropped Location 13 and had elicited the same reaction when it released another studio album in the form of America, Location 12 in 2017.

On all of these occasions, the same questions popped into my head: “Dispatch? That Dispatch? Dispatch still exists?” This is largely due to the fact that, at least in my mind, Dispatch is basically an ancient artifact; a relic of the new generation of jam bands that blew up at the tail-end of the 20th century before that particular era hit its peak at some point in the mid-2000s.

Dispatch may not be the force they once were, but the group has somehow managed to endure in the wake of the genre’s contemporary heydey, and the fact that they’re still releasing music remains pretty baffling to me. However, they’re not only still pumping out tunes but have done so at a pretty steady clip, as they’ve put out three studio records since 2012 in addition to some live albums and a handful of singles they’ve pulled out as they’ve continued to regularly tour.  In hindsight, I realized it shouldn’t have taken me as long as it did to realize that Dispatch isn’t “back”; they’ve been back for a while (even if they’ve been flying lower under the radar than they once were).

In my defense, I was under the impression they had broken up, which was technically correct, as they performed what they announced would be their final show in front of an estimated crowd of around 110,000 people in Boston all the way back in 2004.

I also remember frontman Chad Urmston then turned his attention to State Radio, a trio whose sound was defined by the more rock-heavy and politically-focused aspects of Dispatch. Bassist Pete Francis Heimbold also branched out by pursuing a solo career where he showcased the more reckless and wild side of the band and I remember attending a concert of his at some point that was a pretty good time (drummer Brad Corrigan also struck out on his own by pulling from Disptach’s folksy side, but that’s about all I remember about his stuff).

The group would eventually reunite in 2007 and spent a couple of years playing some one-off shows, although they gave off more of an “old college friends getting together for a bachelor party” vibe as opposed to an actual concert. However, they eventually decided to officially get the band back together in 2011, a development that somehow failed to come to my attention.

Dispatch will always have a special place in my heart because their music was everpresent during a certain period of my life that would coincidentally come to an end around the same time they disbanded. It felt like a natural conclusion; it was time for both of us to move on and turn toward the future as opposed to clinging to the past. When they reemerged, I guess it didn’t really register because they were one of the groups I always felt I’d refer to in the past tense.

Now that they’ve unexpectedly come back into my life, I decided to sit down and take a look at the journey that led to this rediscovery, which can trace its roots back to when its three founding members started collaborating while attending Middlebury College in Vermont.

Like many people in the Northeast trying to figure out what to do with their life after graduating, they shipped off to Boston, where they began to tour while continuing to develop their sound. Originally focusing on acoustic and harmony-driven music, the group soon began to draw on more electric influences and the result was a hybrid of ska, reggae, and funk. What was especially interesting is that each member of the band could hold their own on guitar, bass, and drums, which made for lively and unique shows where they’d routinely rotate between various instruments over the course of the performance.

Their popularity began to increase thanks largely to word of mouth but they really announced their arrival with 1997’s Bang Bang, their second studio album. It contains some of their most memorable songs, including the titular track in addition to “Here We Go” and “The General, the latter of which is arguably their biggest hit.

Making it in the music industry requires you to work hard and pay your dues but sheer luck also plays a key role. Sometimes, it helps to be in the right place at the right time, and the fact that the uptick in the buzz surrounding Dispatch (especially on college campuses) coincided with Napster really hitting its stride was crucial to the band ascending to the next level.

It’s difficult to appreciate just how much the ability to download music changed the game unless you experienced that digital revolution yourself, as you were suddenly able to discover stuff you might have never stumbled upon otherwise. To be honest, it was a bit overwhelming, as it was easy to unintentionally spend hours adding songs to your library (I actually had one friend who deleted a bunch of files after his hard drive reach its capacity—including the ones that were needed to start and run his computer).

Looking back, it seems like there were two bands in particular that benefited the most from this newfound access: Dispatch and O.A.R, who, while different, both made the kind of music seemingly designed to play loudly while drinking beers or throwing a frisbee around the quad. I couldn’t tell you why, but most people eventually came to identify as a “Dispatch Person” or an “O.A.R. Person (I fell into the former category, as I could never get past the fact that most of O.A.R.’s lyrics sounded like pure gibberish).

In 2000, Dispatch released Who Are We Living For?, an album that was far more interesting from a music standpoint than Bang Bang. The acoustic guitars and harmonies were still there, but they were now supplemented by a sort of dirty, garage band sound and some elements that called to mind the Beastie Boys. It signaled the band wasn’t afraid to make the music it wanted to make as opposed to what was expected, and it felt like they were one of those groups that was on the rise and nothing was capable of stopping that ascension.

With that said, there was always some tension between the members of Dispatch, and at times, it felt like they were competing with each other as opposed to working to create a cohesive sound. It wasn’t as noticeable on the records recorded in the studio, but it was very apparent to anyone who attended a show in person.

They’d always sort of prided themselves on not really having a dedicated frontman, almost championing themselves as musical socialists. In hindsight, it was an experiment that was almost certainly destined to fail.  At the end of the day, if everyone is a leader, there’s really no one to lead, and this is what ultimately led to their demise. In 2002, Dispatch announced they would be taking an infinite hiatus before going out with a bang with the aforementioned show in Boston, but it seemed like pursuing their own venture was the best move for everyone involved.

It would take around a decade for the founding members to realize the lack of a dedicated frontman was a hurdle that needed to be cleared. They accepted having three people with their hands on the steering wheel makes it all but impossible to successfully drive the bus, and Urmston (who had become the most successful of the bunch) was allowed to take the creative helm.

It turned out to be the perfect move, as their last two albums and the smattering of singles they went on to release have resulted in some of their best work to date. Their sound has continued to evolve and mature, which is a reflection of the evolution and maturation its members have experienced. It finally feels like they’re all operating on the same page, which is something you couldn’t always say about their music during their formative years.

With that said, their second act hasn’t been all sunshine and rainbows. In 2016, Heimbold elected to skip a European tour, and the following March, he announced that he was taking a sabbatical to address an ongoing battle with depression. As a result, the trio became a duo and remains one to this day while surrounding themselves with session and touring musicians to supplement the loss of Heimbold (their website currently refers to Dispatch as a five-piece band, but it’s unclear who comprises the quintet in addition to Urmston and Corrigan, who are the only members listed by name).

Dispatch has never been a band to shy away from making political statements and the current environment has provided them with plenty of fodder (for example, they used a new acoustic version of “Promise Land” in an attempt to encourage people to vote in this year’s election).

Their upcoming album is set to be released in phases, with each one designed to focus on subjects including grief and transition. The first installment came out in October, which, according to the band, is intended to “tell stories of the shock, surprise, and chaos that often emerge in the earliest stage of change” (the final product is set to be released in its entirety toward the beginning of 2021.

I’d like to close this out by apologizing to Dispatch for my unintended ignorance. Yes, they broke up, did some reunion shows, and eventually got back together. However, I spent far too long operating under the assumption they never truly reunited, but based on the music I didn’t even know existed until recently, they’re more alive and well almost 25 years after forming than I could’ve ever imagined.