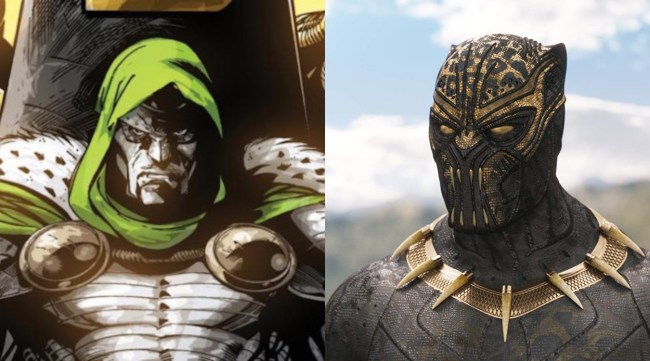 Given his status as one of Marvel’s most iconic and threatening villains, Doctor Doom’s introduction into the Marvel Cinematic Universe is merely a matter of when, not if, especially with the pending addition of the Fantastic Four to the fray.

And according to recent rumors, that long-awaited intro to the MCU may come in 2022’s Black Panther 2.

According to Charles Murphy, a former MCU Exchange writer, the Latverian ruler Doctor Doom is set to feature as the main villain of Black Panther II, and that the sequel will see “Victor Von Doom expanding his empire, conquering parts of Africa, and ultimately coming into conflict with the nation of Wakanda and the Black Panther.”

As Murphy notes, the Black Panther and Doctor Doom have clashed on numerous occasions in Marvel comic book continuity, including the 2010 Doomwar event, which saw Doom covertly invading Wakanda in order to get his hands of its supply of Vibranium. [via FlickeringMyth]

The main protagonist of the Fantastic Four, Doctor Victor Von Doom is widely considered to be one of, if not the best villain in Marvel Comics’ rogue’s gallery, making his arrival to the MCU a mere eventuality.

Prior to Disney’s acquisition of Fox, a solo Doctor Doom film was in the works from Fargo and Legion creator Noah Hawley. In fact, back in August, Hawley himself said that the script was complete.

While it appears Disney will not be moving forward with Hawley’s project, integrating the character into the franchise is likely a priority for the studio in the coming years all the same.