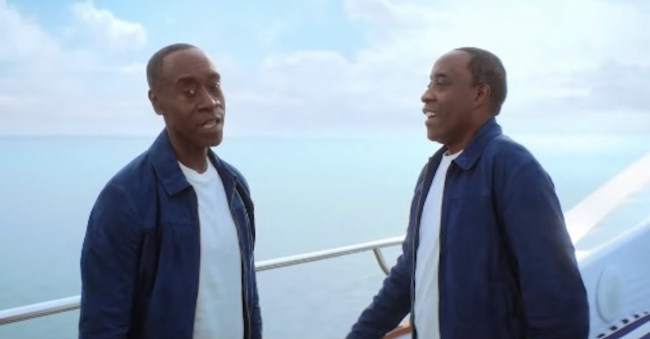 While the Super Bowl may not be the exact same as years past, many of the Big Game’s iconic elements will remain, particularly when it comes to the slickly-produced, celebrity-filled ads that have become a part of popular culture unto themself.

The tradition of lavish, hilarious, big-budget Super Bowl ads will surely continue on Sunday, particularly when it comes to this awesome Michelob ULTRA Organic Seltzer commercial, which features some truly-mindblowing celebrity lookalikes, including Sylvester Stallone, Usher, Megan Fox, and Don Cheadle. If you’ve ever spotted a truly on-point doppelganger while at a bar with some friends, then you hopefully remember what a truly unique thrill that is.

We got to speak to Mr. Cheadle about anchoring the commercial and the beloved Academy Award-nominated actor shared some insight on how awesome it was to work with his younger brother, who plays Cheadle’s doppelganger in the spot.

“It’s a pretty cool commercial, the tagline is “As real as it tastes”, so the commercial takes a swipe at that in a real funny way with me being the button at the end. I don’t want to give the whole thing away because you want to experience the surprises in the commercial. There’s a look-alike component to the commercial, and there’s some fun to be had with some celebrity look-alikes.

A huge thing, which is great, is that my brother is in the commercial, as well. So having the opportunity to put him in a Super Bowl commercial when our team is in is just crazy. “

Naturally, we then asked which of the Cheadle brothers was the eldest and if looking ageless was a family trait or Don’s personal power:

“He’s younger than me, but he looks older,” Don said.

“Does he not age, too? Or is that just your skill?” I asked.

[laughs] “I think I age,” Don replied, “but thank you, I appreciate that.”

Must be nice being Don: starring in the biggest movies of all-time, drinking cold seltzers on hot yachts, and having a younger brother who actually looks older than you because you haven’t aged since 2003.

You can catch Mr. Cheadle and his brother in the Michelob ULTRA ad this Sunday. You can also listen to our full interview when the latest episode of the Post-Credit Podcast drops on Friday!