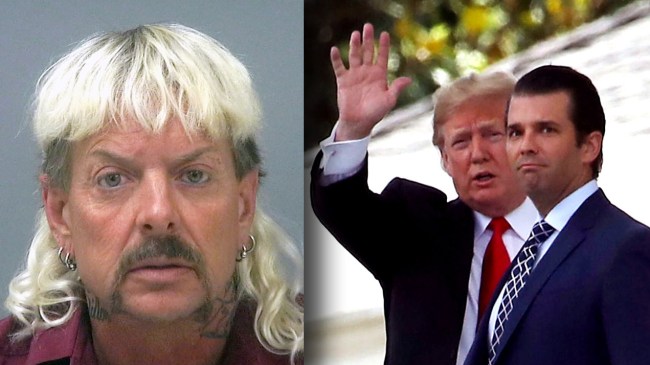 Joe Exotic, real name Joseph Allen Maldonado-Passage, is the central figure in the ultra-popular Netflix documentary Tiger King: Murder, Mayhem and Madness. He is openly gay, has practiced polygamy, owned hundreds of exotic animals, falsely portrayed himself as a country music singer, ran for President in 2016 and for Governor of Oklahoma in 2018, and is currently serving 22 years in federal prison after being convicted on 17 federal charges of animal abuse and two counts of murder for hire.

Donald Trump is the 45th President of the United States.

One would think that comparing the two of them would be considered a dig at the President, right? What about Photoshopping Trump right into Joe Exotic’s mugshot? That would definitely be a slap in the face, right?

Someone might want to tell that to the President’s son Donald Trump, Jr.

“Hahahahaha I love the internet. I heard about this guy 🤣🤣🤣,” Trump Jr. wrote while sharing said Photoshopped mugshot.

Hahahahaha I love the internet. I heard about this guy🤣🤣🤣

Naturally, because, internet, folks were quick to pounce on Junior for being so blatantly clueless as to how the Photoshopped image could be perceived, or if in fact he actually noticed that his father is the face in the photo.

who wants to tell him? pic.twitter.com/KTDzjFMssz

The self-own king doesn’t realize the Tiger King is actually the Lyin’ King...

This can't be real. He cant possibly be this stupid?

And here we were thinking Eric was the simpleton.

In his favor, Junior did also post this photo of Biden as Joe Exotic, which is pretty good too.