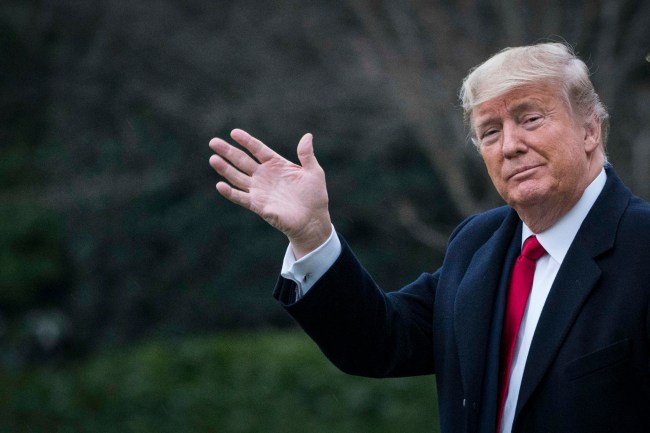 President Donald Trump has made it clear in the past that every NFL player should “stand proudly” for the national anthem or they shouldn’t be playing but it doesn’t seem like he’s following his own advice.

During his Super Bowl party at Mar-A-Lago, Trump was filmed goofing and acting like he was conducting a band while everyone around him stood still during the anthem.

During the national anthem at his own Super Bowl watch party Sunday night, a brief video posted to Instagram shows Trump greeting guests, adjusting his chair, and straightening his suit jacket as other attendees — including first lady Melania Trump and their teenage son — stand with their hands over their hearts. As “The Star Spangled Banner” crescendoes, Trump raises both of his hands in the air, and twirls them around as if conducting the music. The video was included in an Instagram story by a real estate agent for a Russian-American firm who frequents Mar-a-Lago and other Trump properties and events.

For someone who claims to be such a patriot (and who attacked NFL players protesting police brutality), it sure doesn’t seem like @realDonaldTrump has a lot of respect for the National Anthem. pic.twitter.com/VrPBx1HXzo

Of course Trump was called a hypocrite by several pundits on the Internet.

Trump has repeatedly said Americans should “stand proudly” during the national anthem, and publicly chastises those who don’t as disrespectful of the troops.

Well…this seems to be not standing proudly.