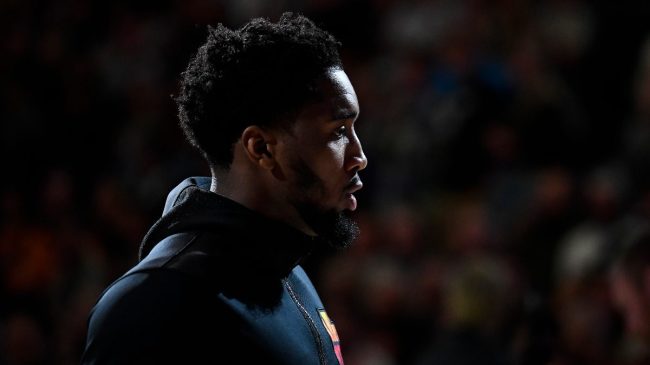 The Cleveland Cavaliers and the Utah Jazz rocked the NBA world on Thursday after making a huge trade. Donovan Mitchell is heading to Cleveland, where he joins Darius Garland, Evan Mobley, and Jarrett Allen. Utah received a haul in their own right as they are clearly rebuilding. However, Mitchell shared a hilarious reaction to the new deal and it might prove he’s been manifesting this since childhood.

Not too long after the trade was finalized, Donovan Mitchell hit social media to share his reaction. Within the tweet, Mitchell shows himself as a child repping a Cavs jersey. Next to it, is a picture of Brian Windhorst in his famous “why would they do that” meme.

What really makes this tweet though is that Windhorst was talking about the Jazz in this meme. However, it was more focused on Rudy Gobert right before he was traded to the Minnesota Timberwolves. Regardless, Donovan Mitchell has a clever sense of humor and seems excited about his future with the Cavs.

Just imagining him playing alongside Darius Garland has us excited. That is an insane backcourt that is going to cause mayhem to every opponent. Additionally, with Evan Mobley coming into his own as a power forward, the Cavs suddenly have a big three to compete in the Eastern Conference. It’s no wonder Donovan Mitchell is chomping at the bit to play in Cleveland.

Look for this team to make some noise in the upcoming season now that they have a bonafide superstar leading the way.