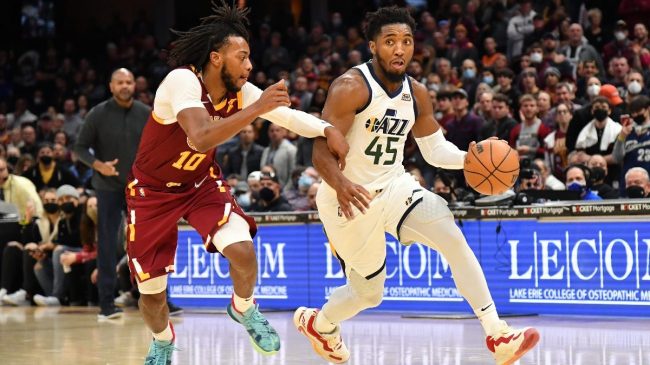 The NBA just got a whole lot more interesting. After much speculation of the Utah Jazz seeking to trade Donovan Mitchell, the front office finally accomplished that feat. In a surprising turn of events, the Cleveland Cavaliers land the superstar shooting guard, and fans are losing their minds about it.

According to Adrian Wojnarowski, the Jazz are receiving Lauri Markkanen, Ochair Agbaji, Collin Sexton, and three unprotected first-round picks along with two pick swaps. That’s a decent-sized haul in its own right. However, the Cavaliers have to feel ecstatic about acquiring Donovan Mitchell to pair up with Darius Garland.

In addition to the trade, Collin Sexton has agreed to a sign-and-trade deal, per Woj. So, Sexton gets the big contract he was seeking while the Cavaliers trade him for Donovan Mitchell.

Sexton has agreed to a sign-and-trade deal to join Utah, sources said.

NBA World Loses Their Mind Over The Donovan Mitchell Trade

A big trade like this in the NBA surely drums up the reactions from fans. Although the New York Knicks and Miami Heat were rumored to be actively seeking a trade with the Jazz, the Cavaliers swoop in and land Donovan Mitchell. Here are some of the best reactions to the massive swap.

Of course, someone roasted the Knicks.

Others simply view this Donovan Mitchell trade as art.

Way too relatable. At least Cavs fans are excited about having Donovan Mitchell on the team.

Hopefully, this trade works out for the Cavaliers as they now have a superstar to play alongside with Darius Garland, Evan Mobley, and Jarrett Allen. What a massive trade with the NBA season right around the corner!