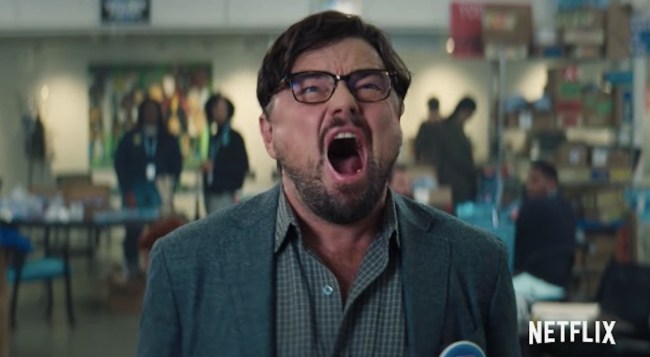 Netflix has released the full official trailer for Adam McKay’s star-studded Don’t Look Up and it unsurprisingly features what will likely be another Academy Award-nominated turn from Leonardo DiCaprio. After all, the last two “comedies” that Leo has starred in– The Wolf of Wall Street and Once Upon a Time in Hollywood — netted him Oscar noms for Best Actor, and Don’t Look Up certainly looks like it will earn him another, which will be the seventh of his career.

The film, which is directed by Anchorman and The Big Short director Adam McKay, features DiCaprio and fellow Academy Award winner Jennifer Lawrence as astronomers desperately trying to warn the world about an oncoming, planet-killing comet.

Following Don’t Look Up, Leo will be heading back to starring in prestige dramas as he’s set to feature alongside Jesse Plemons and Robert De Niro in Martin Scorsese’s upcoming crime western Killers of the Flower Moon. As for Lawrence, her next film following Don’t Look Up will be the Lila Neugebauer-directed Red, White and Water alongside Brian Tyree Henry.