Does Anyone Have It Better Than Doug Emhoff, Our Nation’s First Second Husband? 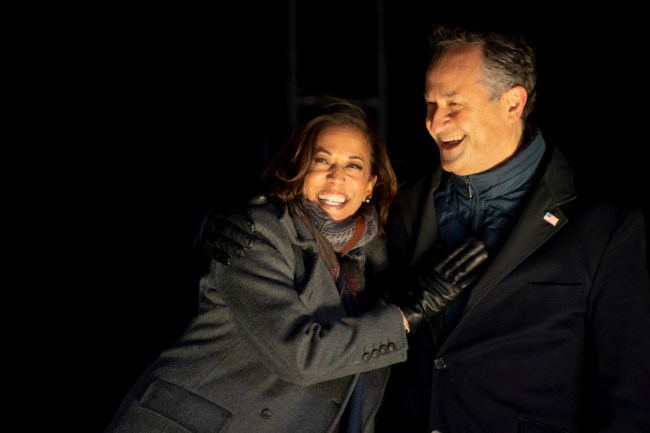 America, let’s welcome our first second husband, Douglas Emhoff! What a wonderful first for us. We finally have a man in a position to reap ALL the benefits of his wife’s accomplishments, without having to do anything. If that isn’t the new American dream, I don’t know what is.

Douglas Emhoff, the husband of Vice President-elect Kamala Harris, will be the first male spouse of a vice president come January.

Emhoff, a successful entertainment lawyer, was a mostly quiet and supportive presence on the campaign trail when Harris was running for president during the Democratic primary.

Harris and Emhoff met after they were set up on a blind date in 2013 by Harris’ best friend when Harris was California’s attorney general. Emhoff was, at the time, divorced from Kerstin Emhoff, with whom he has two children, Cole and Ella.

Good for you, Doug. Drink it in pal. Literally, drink as much as you can. I can’t even imagine the wine cellar he’ll have access to as second husband. We already know that Kamala is a wine enthusiast herself, so we can probably assume that Doug likes to throw back a glass or four too. And given that Joe doesn’t drink, and Trump didn’t drink, you’d have to think that the wine collection at the White House has been collecting dust for the past four years. I’ll bet some of those reds will be coming into their prime right around inauguration day. Just in time for ol’ Dougie to sample a few.

You know what pairs nicely with wine? Any plate of food your brain can come up with. Whatever Doug can imagine, he can have. How about a braised lamb shank with some collared greens, potatoes lyonnaise, and a side of Stabursts to help balance out this ’75 Chateau Margaux? Sure thing, Mr. Second Gentleman, coming right up. Or, if he’s feeling naughty, a Shake Shack Shackburger with a Popeye’s Spicy Chicken Sandwich on top and an Arby’s Smokehouse Brisket on the bottom? Uhm, absolutely sir. Let me just plug in the defibrillator first.

The best part is, he’s going to have all the time he wants to explore the wonders of the White House. While Kamala is up in the oval office, working through massive geopolitical decisions with Joe, Doug will be riding an e-scooter around the subterranean tunnels with that triplex heart attack sandwich leaking juice down his chin, laughing his face off. When he gets tired, he’ll kick his legs up in the state-of-the-art home theater and watch all the John Wicks in succession. This guy just won the lottery of life.

Officially, the second family lives at 1 Observatory Circle—a massive white brick bungalow on the 12-acre grounds of the Naval Observatory.

Number One Observatory Circle, this Queen Anne style house is home of the Vice President. The house was built in 1893 for its superintendent of US Naval operations and made available to the VP & their families in 1974. #houses #home #numberoneobservatorycircle #homeofthevps #vicepresident #queenannevictorian #victorian #victorianhouse #wraparoundporch

Clearly, that place is haunted. Not sure there’s even a question. Needless to say, I suspect that first gentleman Doug Emhoff will be accompanying Vice President Harris over to the White House at every opportunity. They’ll say goodbye at the door—she’ll go do the important stuff while he turns the place into his own personal Willy Wonka’s Chocolate Factory.

Good for you, Doug. Enjoy it, pal. Your wife earned it.